Nuclear power plants account for about 20% of the electricity and half of the carbon-free electricity generated in the U.S. However, plants are aging and economic challenges have led to closures and planned shutdowns.

In FY 2021, the Department of Energy made 3 awards totaling $4.6 billion to support development of new reactor types that are expected to bring improvements.

To monitor projects, DOE uses practices such as milestone tracking. It plans to add additional practices—such as independent reviews—to oversee awards. DOE could do more to ensure these practices will be consistently used. Our recommendation addresses this issue. 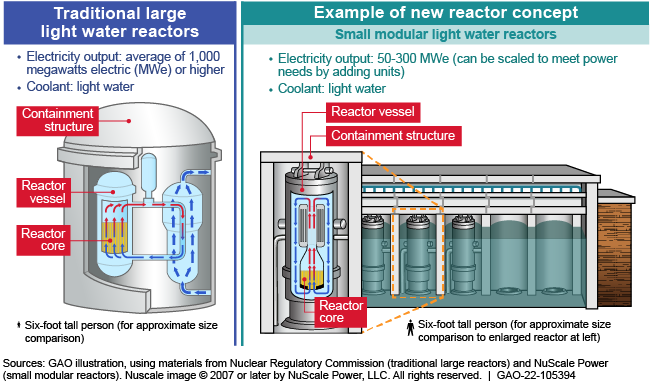 Reissued with Revisions Sep 15, 2022
On September 15, 2022, comment letters from the Department of Energy and the Nuclear Regulatory Commission were added in appendices III and IV, respectively. Corrections are on pages 25-26, and page 27.
Skip to Highlights

In 2021, nuclear energy accounted for almost 20 percent of the nation's electricity generation and provided about 50 percent of the carbon-free electricity. However, economic challenges have led to the closure or planned shutdown of multiple nuclear power plants. To address these challenges, DOE has made awards to projects that demonstrate first-of-a-kind small modular and advanced reactors. These are either smaller than existing reactors or use technologies expected to offer improvements over the most recent generation of nuclear reactors. According to DOE, the federal government has a unique role to play in reducing the financial and technical risks faced by companies seeking to develop these technologies.

GAO was asked to review DOE's management of nuclear energy demonstration awards. This report (1) describes awards DOE has made to support the demonstration of small modular and advanced reactors; and (2) examines actions DOE is taking to manage risks associated with awards.

On September 15, 2022, comment letters from the Department of Energy and the Nuclear Regulatory Commission were added in appendices III and IV, respectively. Corrections are on pages 25-26, and page 27.
Skip to Recommendations

GAO is recommending that DOE institutionalize via documentation its processes for providing oversight for large nuclear energy demonstration projects, including the use of external independent reviews. DOE agreed with GAO's recommendation.