Past bioterrorist attacks, such as the anthrax attacks of 2001, highlight the threats posed by chemical, biological, radiological, and nuclear agents—and the importance of medical countermeasures to treat people in the aftermath.

FDA established the Animal Rule in 2002 to allow for the approval of medical countermeasures based on animal studies when human clinical trials are not ethical or feasible.

We found that FDA has provided guidance to support development of medical countermeasures under the rule, such as by clarifying the types of data needed to demonstrate product efficacy.

FDA has approved 16 medical countermeasures under this rule. 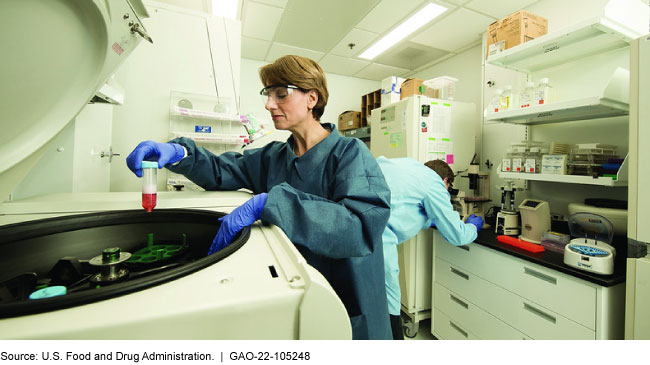 Research of Biological Agents in a Clinical Laboratory

FDA established the Animal Model Qualification Program in 2011 to provide publicly available animal models to support efficacy testing under the Animal Rule for multiple medical countermeasures for a given disease or condition. Researchers and developers can submit models to the program for qualification, and, once qualified, a model can be used by other developers when appropriate. For example, an animal model for inhalation anthrax would include protocols, such as exposure timing and dosage, to produce disease manifestations that adequately reflect inhalation anthrax manifestations in humans. As of April 2022, FDA has qualified one animal model under the program. FDA officials and many developers GAO spoke with attributed the limited number of qualified models to a lack of an incentive to pursue qualification. Specifically, submitting a model for qualification is voluntary, and FDA officials said the qualification process is rigorous and resource intensive, which may deter submissions. However, many developers reported that the limited number of qualified animal models has not impeded product development, citing other ways to identify animal models that can be used for product development. FDA officials and others that GAO spoke with, including some developers and contract research organizations, said the program may still be beneficial. For example, FDA officials said the program could help further future development of medical countermeasures, particularly for CBRN agents that currently do not have approved medical countermeasures.

HHS and the Department of Defense provided technical comments, which GAO incorporated as appropriate.