The Department of Defense subsidizes the cost of off-base child care through its fee assistance program. Currently, only spouses of servicemembers who die in combat-related incidents can receive this aid for their children.

For FY 2020, we estimated potential costs if spouses of servicemembers who die in noncombat-related incidents would also be eligible for assistance. We found that costs could range from about $1.3 to $6.4 million. In addition, expanding fee assistance to these families wouldn't substantially increase the demand for child care services or impact active-duty families. 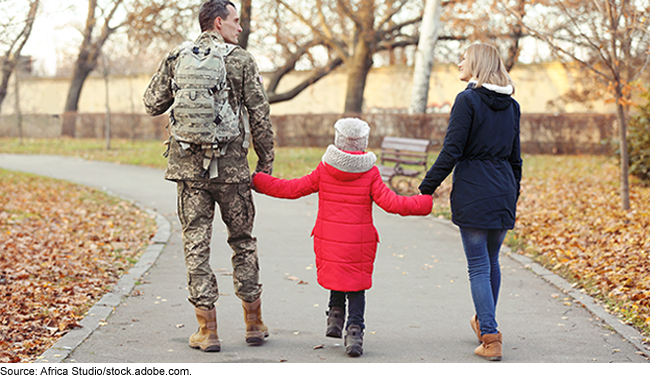 DOD considers its child care program, which includes on-base and off-base child care for military families, a workforce support that directly affects military force readiness, efficiency, and retention. Most of the children in DOD's child care programs are cared for in subsidized child development centers on military bases. When military families cannot access on-base child care due to geographic distance or because there are no openings, DOD subsidizes the cost of off-base care through its fee assistance program.

The William M. (Mac) Thornberry National Defense Authorization Act for Fiscal Year 2021 (NDAA) includes a provision for GAO to review the implications of expanding fee assistance for off-base providers of child care services to survivors of members of the Armed Forces who die in non-combat related incidents in the line of duty. This report describes (1) the estimated costs of expanding fee assistance for off-base child care services to children of servicemembers who die in noncombat-related incidents and factors that drive those costs, and (2) the reported potential effects of such an expansion on the availability of off-base child care services for children of active-duty servicemembers.

To address these questions, GAO analyzed data from DOD on servicemember deaths and children of deceased servicemembers for fiscal years 2009 through 2020, as well as data on fee assistance applicants and participants from the military service branches and CCAoA. We interviewed DOD officials, including those from different service branches, and representatives of CCAoA. We also reviewed relevant federal laws and regulations and reports.