PFAS (per- and polyfluoroalkyl substances) are a group of chemicals used in numerous consumer products—such as nonstick cookware. Most people in the U.S. have been exposed to PFAS, which can be harmful to humans at certain levels.

The EPA plans to regulate PFAS in drinking water in 2023. However, it doesn't currently have nationwide information about the demographic characteristics of communities with PFAS in their drinking water. Such information could help EPA understand, for example, whether PFAS-contaminated water contributes to broader pollution issues in disadvantaged communities.

We recommended that EPA conduct a nationwide analysis. 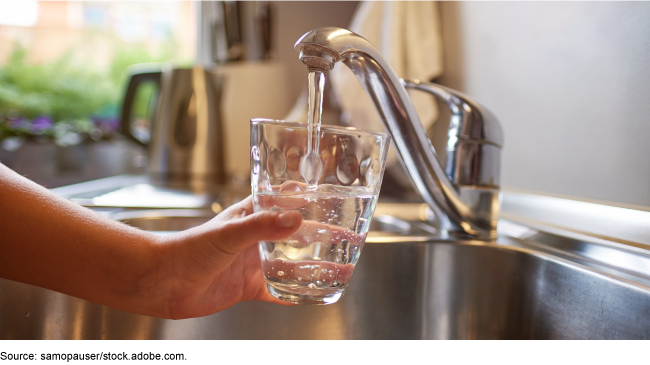 Recent drinking water data from six selected states show that at least 18 percent of the states' 5,300 total water systems had at least two per- and polyfluoroalkyl substances (PFAS)—perfluorooctanoic acid and perfluorooctane sulfonate—above the Environmental Protection Agency's (EPA) 2022 interim revised health advisory levels. Over these levels, adverse health effects can occur and EPA plans to regulate these two PFAS in drinking water in 2023. GAO found that 978 water systems had the two PFAS at or above EPA's minimum reporting level of 4 per trillion (ppt)—the lowest level reliably quantified by most laboratories—and above EPA's health advisory levels. These systems served 9.5 million (29 percent) of the total 33 million people served by all the systems (see fig.).

The demographic characteristics of communities with PFAS in their drinking water varied in the states GAO examined. In Massachusetts, communities with higher percentages of non-White or Hispanic/Latino residents and/or families living in poverty were less likely than other communities to have PFAS in their drinking water. This was the converse situation in New Jersey. According to EPA officials, EPA does not currently have information to determine the extent to which disadvantaged communities are exposed to PFAS in drinking water nationally; however, the agency plans to collect comprehensive, nationwide data. Conducting a nationwide analysis using such data could help EPA understand whether PFAS in drinking water contributes to the cumulative burden of pollution in disadvantaged communities.

According to state officials, public health and PFAS contamination concerns influenced some states' decisions to test and develop enforceable standards or nonenforceable guidance for PFAS in drinking water. As of July 2022, six states set standards and were influenced to do so by public health concerns. When the states set standards, the levels they set were more stringent than EPA's 2016 lifetime health advisory levels. Fourteen additional states developed guidance or began developing standards because of PFAS contamination.

PFAS are a large group of heat- and stain-resistant chemicals first developed in the 1940s. PFAS are used in a wide range of products, including carpet, nonstick cookware, waterproof clothing, and firefighting foam used at airports and military bases. PFAS can persist in the environment for decades. Studies have found that most people in the U.S. have been exposed to PFAS, likely from consuming contaminated water or food. PFAS at certain levels may cause adverse health effects. EPA plans to regulate two PFAS in drinking water, while some states have begun independently testing for and regulating various PFAS.

GAO recommends that EPA conduct a nationwide analysis using comprehensive data to determine the demographic characteristics of communities with PFAS in their drinking water. EPA agreed with the recommendation.