The National Science Foundation provides about 25% of federal funding for basic research conducted at U.S. colleges and universities—about $8.3 billion in FY 2021. NSF has a program to help ensure this funding is spread across U.S. states and territories. The program's goals include promoting researcher diversity and economic development.

We found that states and territories that joined the program in FYs 1980-1992 benefited more from the program and had higher increases in project approval rates than later participants.

We recommended that NSF include more information in its reports to Congress on whether program goals are being met.

28 States and Territories are Eligible to Participate in NSF's Program 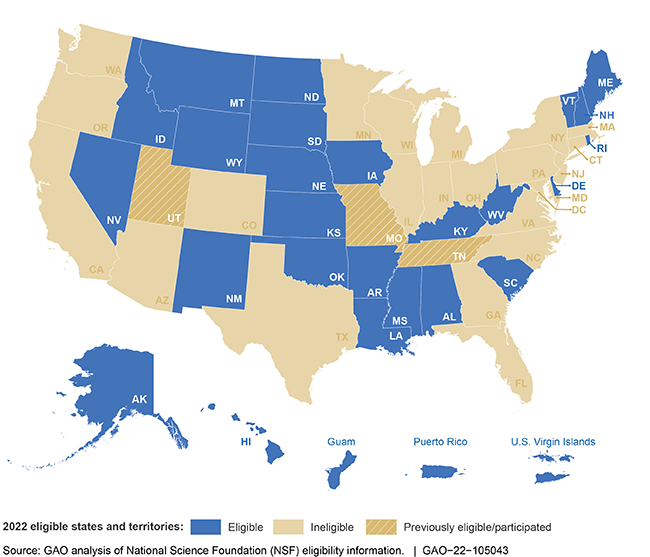 The National Science Foundation (NSF) funds research and education across all fields of fundamental science and engineering. Its Established Program to Stimulate Competitive Research aims to enhance the ability of eligible U.S. states and territories (known as jurisdictions) to compete for research funding from NSF and other federal agencies. GAO's econometric analysis of the program suggested that participating jurisdictions received more federal research funding after joining the program. In addition, the jurisdictions that joined during the program's early growth—between fiscal years 1980 and 1992—had statistically significant increases in their research funding. However, those that joined later—between fiscal year 2000 and 2012—did not, which may be partly because they have not participated as long. The early participants also had larger increases in the success rates of their NSF research proposals.

Officials from seven participating jurisdictions described ways in which the program helped increase research competitiveness or met other program goals, like broadening participation. Most officials stated that this funding has helped them hire or retain faculty. For example, one jurisdiction official said their jurisdiction used the funding to hire researchers with expertise that its research team lacked, including for scientific research.

NSF has made several recent efforts to assess contributions made by the program to increasing academic research competitiveness in participating jurisdictions. The agency plans to build on these efforts by including questions about the program in its agency-wide evaluation plan for fiscal years 2022 through 2026. In addition, NSF reports annually to Congress on the gains made by the program. However, these reports provide limited information on jurisdictions' success in broadening participation of diverse individuals and organizations in research and promoting economic development—goals that are part of the program's mission to enhance research competitiveness. NSF officials said they have such information but have not included it in their reports to Congress because the information is not required. However, the American Innovation and Competitiveness Act requires an analysis of the gains made by the program. Including information relevant to the goals for broadening participation and promoting economic development in its annual reports would allow NSF to communicate more transparently with Congress and other external entities, enabling more effective congressional oversight and public knowledge of the program's impact.

Differences among jurisdictions in the number and competitiveness of proposals that their research institutions submit to NSF can result in some jurisdictions consistently receiving small quantities of research funding. In response to congressional concerns over such funding disparities, in 1979 NSF initiated and Congress later codified the Established Program to Stimulate Competitive Research. The program aims to enhance eligible jurisdictions' ability to compete for federal research funding. The program provided more than $194 million in fiscal year 2021 to various projects in 28 jurisdictions.

GAO is making one recommendation that NSF enhance its annual reporting to Congress on the Established Program to Stimulate Competitive Research. NSF concurred with GAO's recommendation.