The Department of Energy's Office of Environmental Management is responsible for cleaning up nuclear waste from weapons production dating back to World War II. It estimates its remaining work will cost at least $407 billion. (The U.S. government's environmental liabilities are on our High Risk List.)

However, frequent turnover among leadership at this office has slowed cleanup and made it harder to achieve its complex, long-term mission. For example, average service in the top leader role is less than 2 years. We recommended that Congress consider a term appointment (with a specific term length set in statute) for the top leader position. 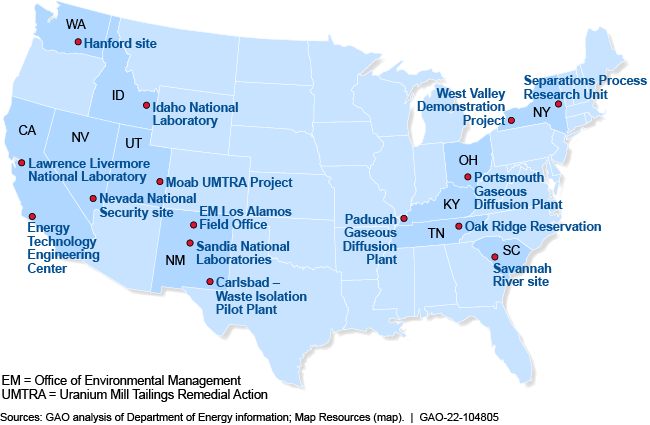 The Department of Energy's (DOE) Office of Environmental Management (EM) has experienced frequent turnover in its top leadership position, with the average top leader serving for less than 2 years. In the last 2 decades, there have been five Senate-confirmed assistant secretaries (political appointees) and nine acting assistant secretaries or senior advisors (see fig.). Frequent turnover has created challenges for achieving the department's complex and long-term cleanup mission, such as difficulty building relationships with stakeholders, inconsistent and incomplete initiatives, and a focus on short-term actions over long-term priorities, according to those GAO interviewed.

Several options exist that can enhance leadership commitment. Specifically, DOE's Deputy Secretary told GAO that filling EM's top leadership position with a senior career official, rather than a political appointee, could help overcome some of the challenges, if serving for a long enough tenure. Alternatively, GAO has found that term appointments can help agencies facing long-term challenges that require sustained leadership attention over time. For example, GAO has previously supported establishing term appointments of at least 5 to 7 years for certain leadership positions. Legislation establishing a term appointment for EM's top leader could help improve leadership stability, address challenges, and better support EM's long-term mission to clean up nuclear waste by helping create an organizational commitment that can endure across administrations.

Turnover in the Office of Environmental Management's Top Leadership Position, 2001 to 2021

In addition to frequent turnover in leadership, EM's different positions in DOE's organizational structure have not provided sustained leadership commitment for environmental cleanup. EM has reported to DOE's Deputy Secretary and three under secretaries at different points throughout EM's history (see fig. on next page), but those GAO interviewed said that none of these organizational positions have supplied EM with the consistent leadership it needs. GAO's prior work shows that the nature and scope of the changes needed in federal agencies facing long-standing management challenges and high-risk operations require the sustained commitment of the top political leadership. Congress has previously created new under secretary positions in DOE in the wake of concerns regarding departmental management of and leadership attention to particular mission areas. A new, dedicated DOE under secretary position for nuclear waste management and environmental cleanup could help ensure that EM receives the sustained attention and commitment it needs to make cleanup progress.

Office of Environmental Management's Positions in Department of Energy's (DOE) Organizational Chart, 2001 through 2021 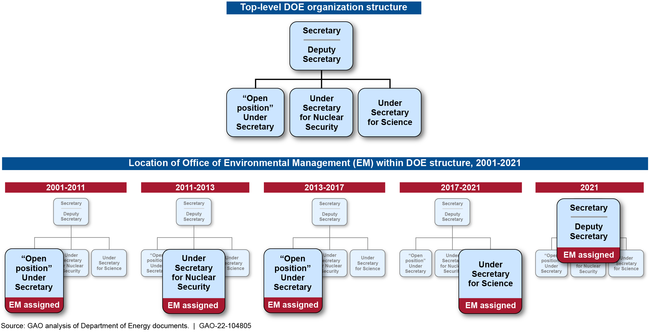 Since 1999, EM leaders have made four major and many minor reforms to EM's organizational structure. EM communicates with its workforce about organizational reforms using various tools, but it is not taking full advantage of opportunities to involve employees in these reforms. For example, according to some senior DOE and EM officials GAO interviewed, EM has obtained limited employee input about previous organizational reforms, aside from input at the most senior level of EM's leadership. Some EM officials said that, when EM underwent prior organizational changes, EM's cleanup work slowed in part because of employee uncertainty about the impact of the changes on their work. GAO's prior work on agency reforms has demonstrated that a continuous, two-way communication strategy can help respond to employee concerns regarding the effects of potential reforms. By developing such a communication strategy, EM could help maintain the effectiveness of its workforce when implementing future reforms.

EM is responsible for cleaning up legacy nuclear waste from weapons production dating back to World War II. In fiscal year 2021, EM estimated the probable future cost of cleaning up its remaining sites to be $407 billion. In addition, EM expects to shift from constructing to operating waste treatment facilities in coming years. However, EM's cleanup costs and contract and project management are included on GAO's High Risk List, for various reasons.

House Report 116-442 includes a provision for GAO to review EM's leadership capacity. This report examines the extent to which EM (1) has had sustained and consistent leadership commitment and (2) communicates with its workforce in developing and implementing reforms. GAO reviewed DOE data on changes in EM's leadership, as well as EM memos and reports on its reorganizations. GAO also interviewed current and former top leaders of EM, whose collective tenures cover most of EM's history, as well as other DOE officials and stakeholders.

GAO is making two matters for congressional consideration, including establishing a term appointment for EM's top leader and creating a new DOE under secretary position, and one recommendation that EM should develop a communication strategy for developing and implementing reforms that includes continuous, two-way communication mechanisms. DOE agreed with the recommendation and stated that it is taking actions to improve communication as part of a strategy.