Methane, a greenhouse gas, is emitted during oil and gas production—either through intentional releases or leaks. It is also a lost source of revenue for the government when emitted from sources on federal lands. Methane emission rules are now being revised.

Some in the oil and gas industry are voluntarily reducing methane emissions, such as by using satellites to detect them, in addition to the EPA-required handheld devices. Well operators may seek EPA approval for detection alternatives, but few have. Some cited onerous burdens for approval.

We recommended that EPA give operators greater flexibility to use alternative technologies and more. 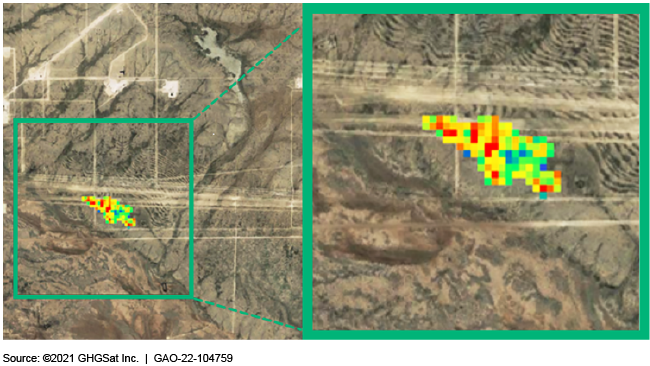 The Environmental Protection Agency (EPA) and the Department of the Interior's Bureau of Land Management (BLM) each issued regulations to reduce emissions of methane—a potent greenhouse gas—from oil and gas development. However, EPA and BLM encountered administrative and legal challenges in implementing them. For example, in 2016, EPA established national standards for methane emissions, but EPA repealed and curtailed those requirements in 2020. A June 2021 congressional resolution resulted in the reinstatement of the 2016 methane standards. EPA and BLM are in the process of developing proposed rulemakings to reduce methane emissions.

Several industry entities are voluntarily taking actions to reduce methane emissions, such as using aircraft and satellites to detect emissions (see fig.), in addition to the handheld devices required by EPA. However, few operators have applied to EPA for approval to use alternative technologies, which must achieve at least the same reduction in emissions as EPA's required technology. Representatives from some industry entities and stakeholders said they experienced challenges in meeting EPA's requirements, including that site-specific applications are time- and resource-intensive. Without greater flexibility in the process for approving alternative technologies, EPA may hinder the adoption of innovative approaches for detecting and reducing methane emissions.

Selected states have regulations to reduce methane emissions from oil and gas development that exceed BLM's requirements. Historically, gas could be emitted into the atmosphere if the operator did not have the ability to capture it, but three states require operators to submit plans for capturing gas when applying for a drilling permit. Two of these states have enforceable targets for capturing gas. BLM does not require operators on federal lands to submit plans, due to legal challenges. In September 2021, BLM officials said that the agency is considering requiring waste minimization plans from operators but does not expect to include gas capture targets in the proposed rule. Without taking steps to require gas capture during production, BLM is potentially forgoing revenue from wasted gas, which contributes to pollution and greenhouse gas emissions.

Methane is emitted into the atmosphere during oil and gas production—either through intentional releases or leaks. These emissions also result in the loss of marketable natural gas. BLM oversees oil and gas operations on federal lands, and EPA regulates emissions from these operations.

GAO is recommending that (1) EPA provide greater flexibility for operators to use alternative technologies to detect methane emissions; and (2) BLM consider whether to require gas capture plans similar to what states require, including gas capture targets, on federal lands. EPA and Interior concurred with GAO's recommendations.