In 2021, DOD estimated that it would cost $11.9 billion to clean up 1,700 sites in its Formerly Used Defense Sites program. This program cleans up sites that have been contaminated with hazardous substances or military munitions.

When prioritizing funding, DOD selects the sites posing the greatest danger to people and the environment by assigning risk scores for each site. However, DOD assigns scores differently based on whether the site was contaminated by hazardous substances or by munitions. And it does not have guidance to weigh the relative risk between the two types of contamination.

We recommended that DOD develop such guidance. 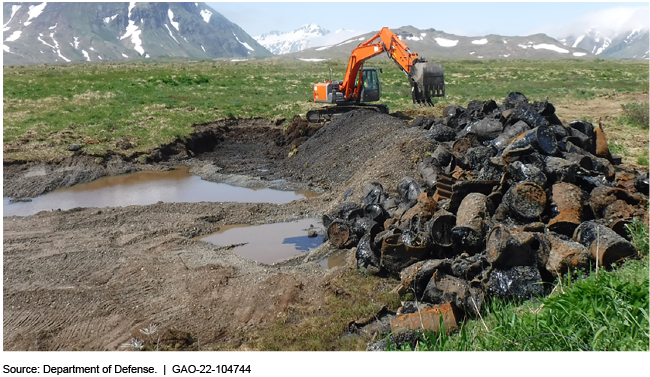 In fiscal year 2020, the Department of Defense (DOD) estimated that it would cost about $10.2 billion to clean up about 1,700 sites in its Formerly Used Defense Sites (FUDS) program. FUDS consists of two main programs: the Installation Restoration Program (IRP), to address hazardous substances, and the Military Munitions Response Program (MMRP), to address military munitions. Environmental liabilities represent future costs to clean up these sites. FUDS environmental liabilities are about 27 percent for IRP and about 73 percent for MMRP. DOD has obligated over $1 billion for FUDS between fiscal year 2016 and 2020, split roughly equally between IRP and MMRP sites. Since the inception of the FUDS program, DOD has cleaned up 85 percent of IRP sites and 45 percent of MMRP sites. Some costs of future cleanup efforts are uncertain, in part because nearly 1,200 MMRP sites are under investigation, and cleanup remedies are not yet known (see fig.). DOD's cost estimates for individual sites improve as it completes investigations and identifies specific remedies.

When making decisions to fund FUDS cleanup, DOD primarily selects the sites posing the greatest risk to human health and the environment by assigning risk scores for each site. DOD assigns scores differently for IRP and MMRP sites. However, DOD does not have guidance to weigh the relative risk between IRP and MMRP sites. If DOD developed guidance, it could better ensure that it is consistent and transparent when selecting sites from IRP and MMRP for funding.

Federal law requires that DOD report on progress of its cleanup programs. In 2012, DOD developed a goal for IRP to complete cleanup of at least 95 percent of sites by the end of fiscal year 2021. DOD did not develop a comparable goal for FUDS MMRP, stating, for example, that developing a goal for FUDS MMRP sites was not practical, given the large number of sites. However, DOD developed goals for other non-FUDS cleanup programs with a similar number of sites. If DOD were to develop a cleanup goal for FUDS MMRP, Congress would be better positioned to hold DOD accountable for achieving a reasonable level of cleanup progress, and the public would be better informed.

House Report 116-120 included a provision for GAO to review the various elements of FUDS. Among other objectives, this report (1) describes the scope and costs of cleaning up FUDS and the reliability of the estimates and (2) examines how DOD selects FUDS for cleanup. GAO reviewed DOD documents, interviewed DOD officials, and analyzed a DOD database containing information on the FUDS program.

GAO recommends that DOD (1) develop guidance to weigh the relative risk between IRP and MMRP sites and (2) establish a relevant cleanup goal for the FUDS MMRP program. DOD agreed with GAO's recommendations.