Gangs and drug cartels commit much of the violence in Belize, El Salvador, Guatemala, and Honduras. The guns they use are mostly from other countries, including the U.S.

While reducing violence in the region is a U.S. policy goal, agencies' efforts—such as helping countries secure their borders—haven't focused on guns. The State Department plans to focus more on gun trafficking but lacks information to tailor its programs to each country's needs. For instance, State hasn't asked other agencies to analyze information about firearms in the countries.

We recommended that State learn more to inform its plans to reduce gun trafficking and violence. 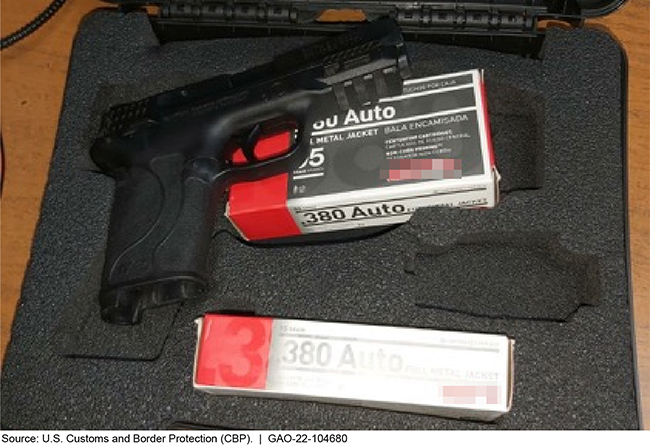 The Department of Justice's Bureau of Alcohol, Tobacco, Firearms and Explosives (ATF) receives firearm trace requests from the governments of Belize, El Salvador, Guatemala, and Honduras for some, but not all, firearms recovered in those countries. ATF tracing data for approximately 27,000 firearms recovered from 2015 through 2019—the most recent data available—show that 40 percent came from the U.S. and the rest from 39 other countries. ATF data also indicate that almost half of the U.S.-sourced firearms were likely diverted from legitimate commerce in the four countries rather than smuggled from the U.S. From January 2015 through March 2021, more than 100,000 firearms were legally exported from the U.S. to the four countries, according to agency data. Firearms are not manufactured in these countries, but U.S. and foreign officials stated that criminals can obtain them through illegal markets and theft, among other means. ATF data show most firearms submitted for tracing were handguns.

Types of Firearms Recovered in Belize, El Salvador, Guatemala, and Honduras and Submitted to ATF for Tracing, 2015–2019

The 2021 U.S. Strategy for Addressing Root Causes of Migration in Central America directs U.S. agencies to address violence, crime, and security in the region. State officials said that in response to this strategy, they plan to develop new projects or modify existing projects to focus on firearms. However, according to the officials, they lack sufficient information about relevant country conditions to tailor these projects to address each country's needs. State officials have not sought such information from the four countries' governments or other U.S. agencies because State has not focused on firearms trafficking in the countries. Obtaining such information would enhance State's ability to develop effective programs to reduce criminal access to firearms and firearms-related violence in Belize, El Salvador, Guatemala, and Honduras.

The four Central American countries Belize, El Salvador, Guatemala, and Honduras have high rates of violence, including homicide. According to foreign crime data and foreign officials, most homicides in the countries are committed with firearms imported legally or illegally from other countries. Violence and insecurity in the countries have been identified as contributing factors in migration to the U.S.

GAO recommends that State obtain information about conditions in the four countries to support the development of effective programs to reduce the availability of illicit firearms. State concurred.