The Global Food Security Strategy calls for a whole-of-government approach to reducing global hunger and food insecurity. The U.S. Agency for International Development coordinates with other agencies to fulfill this goal.

In the 4 countries we selected for our review, agencies reported many ways of coordinating assistance with each other and key stakeholders. But we found their coordination could be improved. For example, the agencies haven't devised a way to share information about each other's current and planned spending.

Our recommendations include ensuring the agencies can access such information to better leverage planned assistance.

USAID Irrigation Project at a Lettuce Farm in Honduras 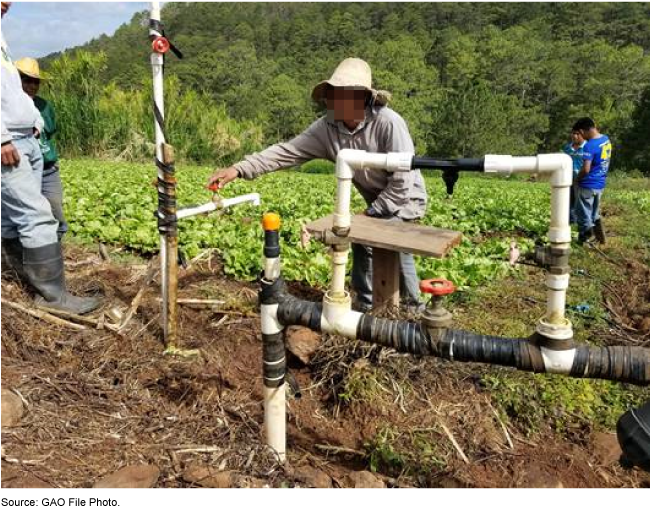 The agencies responsible for implementing the U.S. Government Global Food Security Strategy (GFSS)—collectively known as the GFSS Interagency—have established mechanisms for coordinating assistance at the global and country levels. The U.S. Agency for International Development (USAID) leads the coordination of these agencies' efforts to implement the strategy. At the global level, GFSS Interagency working groups meet to coordinate assistance efforts. At the country level, a country coordinator facilitates a whole-of-government strategy and plan in each country where agencies provide food security assistance. Agencies providing assistance in the four countries GAO selected for its review reported using a variety of mechanisms to coordinate with one another and key stakeholders. Agency officials and key stakeholders generally reported favorably on the quality of this coordination.

GAO found that the GFSS Interagency's mechanisms for coordinating food security assistance generally address four of seven leading practices GAO has identified as important for collaboration. However, this coordination can be improved. For example, agencies without in-country personnel are not always included in country-level planning of U.S. food security assistance. In addition, the GFSS Interagency has not established a mechanism to ensure all relevant agencies can readily access information about each other's current and planned spending. As a result, they have limited ability to leverage each other's planned assistance and promote a whole-of-government approach.

The number of food-insecure people has increased since 2014, and an estimated 768 million people were undernourished in 2020, according to the United Nations. The Global Food Security Act of 2016 required the President to coordinate the development and implementation of a whole-of-government global food security strategy. According to the GFSS, increased interagency engagement is intended to build effective coordination among agencies that contribute to global food security.

GAO was asked to review U.S. global food security assistance. This report examines (1) U.S. agency coordination of global food security assistance at the global level and in selected countries; (2) the extent to which U.S. agencies coordinate this assistance in accordance with leading collaboration practices; and (3) U.S. agencies' management of any duplication, overlap, or fragmentation of assistance in the selected countries. GAO reviewed GFSS documents and interviewed representatives of GFSS agencies and other stakeholders, including implementing partners and host governments in Bangladesh, Guatemala, Kenya, and Niger. GAO selected these countries using criteria such as geographic diversity and high levels of U.S. food security funding.

GAO is making two recommendations to USAID to ensure all relevant agencies are included in planning and coordination of food security assistance and can readily access information about each other's current and planned assistance. USAID concurred with both recommendations.