Research and development has been essential in the Department of Energy's efforts to clean up significant contamination from decades of nuclear weapons production, but over time DOE has reduced funding designated for cleanup R&D.

We could not determine how much DOE actually spends on cleanup R&D because the agency does not track such spending (or the associated research), nor evaluate the outcomes of the research.

In addition, because DOE does not have a comprehensive approach to prioritizing cleanup R&D, individual cleanup sites have had to develop their own approaches, which may not address the needs of all cleanup sites or long-term needs. 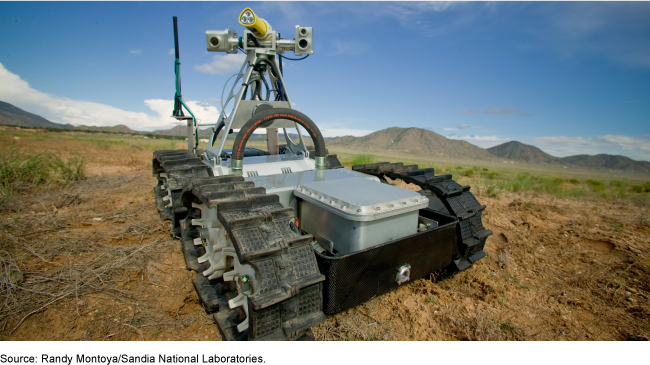 The Department of Energy's (DOE) Office of Environmental Management (EM) identifies cleanup-related research and development (R&D) needs across the EM complex—EM headquarters and sites and DOE's national laboratories—in various ways. For example, DOE officials and contractors at EM sites work closely with national laboratories to identify project-specific R&D needs, including those encountered during the course of cleanup activities, such as managing vapors in nuclear waste storage areas. EM headquarters may identify complex-wide needs (e.g., ways to improve worker safety, such as using robotics, see figure) or work with other DOE offices, including the Office of Nuclear Energy, to identify R&D needs that span DOE missions, such as spent nuclear fuel storage.

EM uses both formal and informal mechanisms to coordinate R&D across the EM complex, including the national laboratory network and working groups. EM's coordination of R&D efforts fully aligns with four of GAO's seven leading practices for collaboration, such as clarifying roles and responsibilities and including relevant participants. However, EM does not fully follow other leading practices, which affects its ability to evaluate the effectiveness of R&D efforts. For example, EM officials told GAO that it does not have a formal system to collect information on R&D activities across the complex, which would enable it to monitor and evaluate the activities' outcomes. Collecting such information could help EM determine whether to encourage or discourage investments in certain areas.

EM also does not take a comprehensive approach to prioritizing R&D. Individual EM sites and national laboratories have their own decision-making processes for prioritizing R&D, but these may not address long-term or complex-wide needs. GAO has found that risk-informed decision-making can help agencies weigh numerous factors and consider tradeoffs, and that doing so would help EM set cleanup priorities within and across its sites. By developing a comprehensive approach to prioritizing R&D that follows a risk-informed decision-making framework, EM would be better positioned to provide sites with guidance for R&D spending beyond their immediate operational needs and direct its limited R&D resources to its highest priorities.

R&D has played an essential role in EM's efforts to clean up massive amounts of contamination from decades of nuclear weapons production and energy research. Such R&D has led to safer, more efficient, and more effective cleanup approaches. Prior studies have found that investments in R&D could reduce the future costs of EM's cleanup efforts, which have increased by nearly $250 billion in the last 10 years. However, funding designated for nuclear cleanup R&D has declined since 2000.

GAO was asked to review EM's R&D efforts. This report examines (1) how EM identifies cleanup-related R&D needs, (2) how and the extent to which EM coordinates R&D across the EM complex, and (3) the extent to which EM prioritizes cleanup-related R&D efforts. GAO reviewed DOE and EM documents and interviewed EM site and headquarters officials and national laboratory representatives. In addition, GAO compared EM's coordination of R&D to leading practices for collaboration and compared EM's efforts to prioritize R&D with GAO's risk-informed decision-making framework.

GAO is making four recommendations, including that DOE (1) develop a system to collect R&D information across the complex to enable monitoring and evaluation of outcomes and (2) develop a comprehensive approach to prioritizing R&D across the EM complex that follows a risk-informed decision-making framework. DOE concurred with the recommendations made in this report.