The State Department provides passport and visa services to millions of Americans and foreign nationals. From FY 2013-19, passport and visa user fees fully funded these consular operations. But during the COVID-19 pandemic, these revenues dropped, and State officials said that fee revenue may not return to pre-pandemic levels for several years.

State has some options to address the decline in consular fee revenue, including increasing fees and reducing spending. Our recommendations would help State plan and document what fees or statutory changes may allow it to cover future costs, among other things. 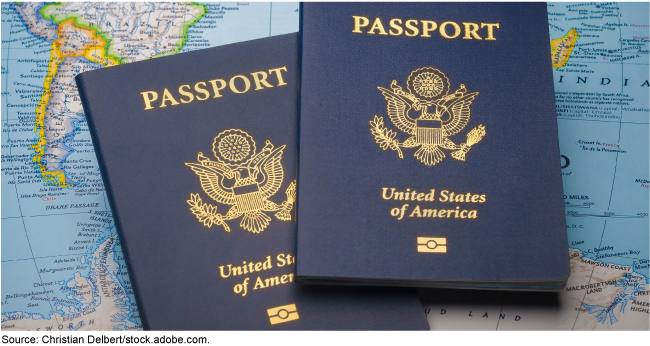 The Department of State provides passport, visa, and overseas citizens services to millions of Americans and foreign nationals annually and collects user fees for some of these services. The COVID-19 pandemic discouraged potential travelers who would pay fees, resulting in a 41 percent decline in consular fee revenue in fiscal year 2020. To compensate for this decrease in revenue, State used supplemental and annual appropriations and temporarily expanded expenditure and transfer authorities provided by several acts of Congress. It also drew down unobligated balances that it had carried over into fiscal year 2020. 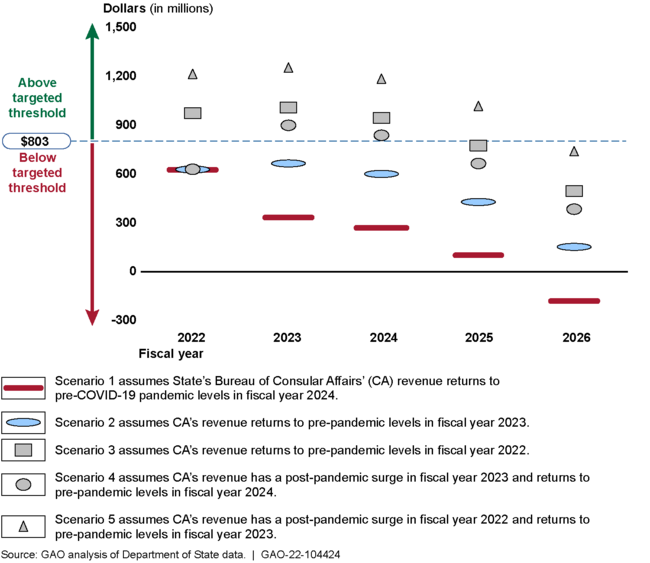 Notes: According to State officials, State's official target is to maintain a minimum 25 percent carryover balance by retained fee each year. GAO used State's target to calculate 25 percent of average historical obligations against the CBSP account as a whole. GAO presents this as the benchmark value of $803 million and uses this calculation to determine the likelihood of State meeting the targeted threshold. GAO's model reflects retained fee amounts as of November 2021.

State has requested statutory changes to its authorities to set and use some consular fees so that it can generate additional revenue or have more flexibility in how it can use revenue. However, State has not documented its analysis to support these requests. Without a plan for assessing the potential impact of the requested changes, State risks recommending statutory changes that do not align with actual needs. As a result, State could collect consular fees in excess of its costs for some services, thereby over-charging visa or passport applicants.

State uses estimates of unit costs, demand and revenue to achieve full cost recovery and to project the sufficiency of consular revenue. State's process for estimating unit costs of consular services fully meets two and partially meets three key elements of economic analysis. Specifically, State does not calculate the range of potential costs, such as those that result from variations in how much time it takes to process a visa; as such, State does not calculate the statistical variability of the resulting unit costs. This lack of transparency on the plausible range of unit costs may limit management's ability to identify, analyze, and respond to risks to full cost recovery arising from fluctuations in obligations. In addition, State lacks documentation of its processes for estimating demand and revenue. By not documenting these processes or key analytical decisions, State risks being unable to retain and share its organizational knowledge on fee setting, including communicating its compliance with best practices.

From fiscal years 2013 through 2019, consular fees fully funded consular operations, according to State documentation. However, the COVID-19 pandemic caused State's revenues from passport and visa fees to drop.

GAO was asked to review consular fees. This report examines, among other things, how State managed the decline in consular fee revenues, projections regarding State's ability to meet the targeted threshold in the future, and the extent to which State's processes for estimating key data meet the key elements of economic analysis. GAO reviewed State documentation and data, modeled projections for the consular fees account, and interviewed State officials.

GAO recommends that State (1) assess what actions would allow it to cover future consular costs; (2) measure the statistical variability of unit costs; and (3) document its cost, demand, and revenue estimates. State did not concur with the first recommendation, indicating it believes the cost model output is sufficient for this purpose. State partially concurred with the other two recommendations, noting it uses a deterministic math model to calculate unit costs and it documents the process for cost estimates. GAO maintains that a plan to assess actions that could cover future costs would better position State to request statutory changes that align with actual needs. GAO also maintains that State should reflect statistical variability in unit costs because not doing so many limit its ability to respond to risks arising from fluctuations in cost. GAO maintains that documenting processes for revenue and demand estimates and fully documenting processes for cost estimates would better position State to identify and respond to risks to full cost recovery.