Illegal, unreported, and unregulated fishing undermines the economic and environmental sustainability of the fishing industry in the U.S. and globally.

The U.S. works internationally to combat illegal fishing at sea. For example, the Department of Defense leads a program aimed at building African nations' maritime security and maritime law enforcement capabilities. However, DOD officials told us that due to a change in U.S. law, it is no longer clear that it has the authority to conduct all aspects of this program.

We recommended that DOD determine whether it has this authority and to seek it if does not.

Coast Guard Officials Preparing to Board a Fishing Boat 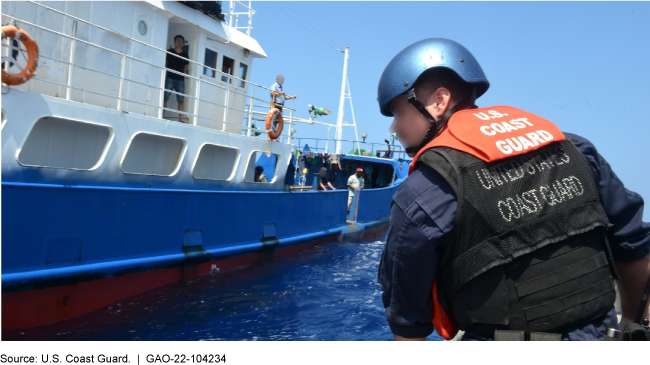 The U.S. works with other nations through multilateral agreements to collectively manage high seas fisheries. For example, the U.S. is a member of nine regional fisheries management organizations (RFMO), which are treaty-based organizations of nations with an interest in managing and conserving fisheries in specific regions of the sea. These organizations establish rules for vessels fishing in the RFMO agreement area, such as limits on the numbers and types of fish that can be caught. In addition, the U.S. establishes bilateral agreements and conducts at-sea operations focused on strengthening other nations' capacity to manage their own fisheries and fleets. For example, the Department of Defense (DOD) leads a program aimed at building African partner nations' capability to enhance maritime security and enforce their maritime laws. However, DOD officials told us that, as a result of changes to the 2017 National Defense Authorization Act, the department no longer has clear authority to conduct the operational phase of this program—known as Operation Junction Rain. By determining whether it has the authority to conduct this operation, and, if not, seeking such authority, DOD could continue efforts to support African partner nations' capability to enforce fisheries laws and regulations, which in turn helps them work to counter illegal, unreported, and unregulated (IUU) fishing.

Coast Guard Officials Preparing to Board and Inspect a Fishing Vessel

IUU fishing undermines the economic and environmental sustainability of the fishing industry in the U.S. and globally. IUU fishing encompasses many illicit activities, including under-reporting the number of fish caught and using prohibited fishing gear. While the illicit nature of IUU fishing means its consequences can only be estimated, a recent study estimates catches from IUU fishing could cause global economic losses up to $50 billion annually. A variety of federal agencies coordinate with one another, as well as internationally, to address IUU fishing at sea.