Increased globalization and recent economic and financial crises have heightened concerns that U.S. businesses may be at a disadvantage in foreign markets. The departments of State and Commerce play key roles in the U.S. government's efforts to support U.S. businesses abroad.

State trains its employees to support U.S. business expansion abroad. However, it doesn't conduct periodic, comprehensive assessments of training needs in this area. Therefore, it cannot know whether its training program meets current or future needs, or prioritizes the right content. Our recommendations address these issues. 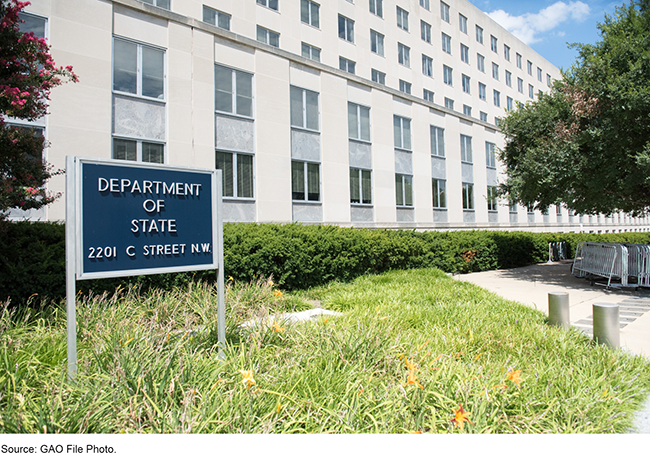 The Departments of State and Commerce implement a range of economic and commercial diplomacy activities domestically and overseas, to promote U.S. commercial interests and support U.S. business efforts to enter or expand in foreign markets. These activities range from engagement with foreign governments and policy advocacy, to information sharing, guidance, and individual services for businesses, and awards for overseas post activities, such as projects to raise intellectual property rights awareness. Over 3,600 State and Commerce personnel on average conducted these activities domestically and in a number of foreign countries in fiscal years 2016 to 2020. These personnel included an annual average of over 900 State and Commerce Foreign Service Officers overseas (see table).

Note: The regions in this table represent State's six overseas regions. Average numbers may not sum to totals because of rounding. For more details, see figure 2 and table 3 in GAO-22-104181.

State offers a range of economic and commercial diplomacy courses for relevant personnel, but GAO found weaknesses in State's training efforts. State's training addresses broader economic and commercial issues as well as specific topics, such as intellectual property rights. GAO found that State has incorporated aspects of the four components of an effective federal training program—planning, design, implementation, and evaluation—into its training efforts. For example, on evaluation, State generally obtains participant feedback for all of its courses. However, GAO found that State does not consult with external stakeholders, such as Commerce and private sector entities, on whether its training is achieving the desired impact. GAO has previously identified that incorporating a wide variety of stakeholder perspectives can help agencies to assess such impact. Although State officials noted that they have coordinated with Commerce to share information on training offerings and may obtain indirect input from the private sector on training, State has not established a mechanism to consult with external stakeholders regarding the impact of its training. As a result, State lacks reasonable assurance it is obtaining appropriate stakeholder perspectives and feedback on whether its personnel engaged in economic and commercial diplomacy are adequately equipped to support U.S. businesses overseas.

Supporting U.S. global competitiveness is a longstanding area of U.S. government interest. Increased globalization and recent economic and financial crises have heightened concerns that U.S. businesses may be at a disadvantage in foreign markets. State and Commerce play key roles in the U.S. government's efforts to support U.S. businesses in foreign markets. The Championing American Business Through Diplomacy Act of 2019 includes provisions focused on improving the efforts of State and Commerce to support U.S. businesses abroad through economic and commercial diplomacy.

The act includes a provision for GAO to report on several issues related to these agencies' efforts in this area. This report describes State's and Commerce's activities in support of U.S. businesses abroad and staff resources provided for these efforts; and assesses State's economic and commercial diplomacy training against GAO criteria for effective federal training programs. GAO reviewed documentation, assessed the reliability of agency data on staff resources and training for fiscal years 2016 through 2020 (the most recently available), and interviewed agency officials.

GAO is making three recommendations to State, including that State should establish a mechanism to consult periodically with external stakeholders on whether its training is achieving the desired impact. State concurred with GAO's recommendations.