Research shows that violence against American Indian and Alaska Native women in the U.S. is a crisis. Cases of missing or murdered Indigenous women persist nationwide, but without more comprehensive case data in federal databases, the full extent of the problem is unknown.

Two 2020 laws have requirements that could help address aspects of the crisis, depending on how the Departments of Justice and Interior implement them. But the agencies have missed some of the requirements' deadlines. For example, they have not yet set up a joint commission to explore the issue.

We recommended developing plans to implement the requirements, and more.

An art installation at the National Museum of the American Indian (2019) intended to draw attention to violent crimes against Indigenous women. 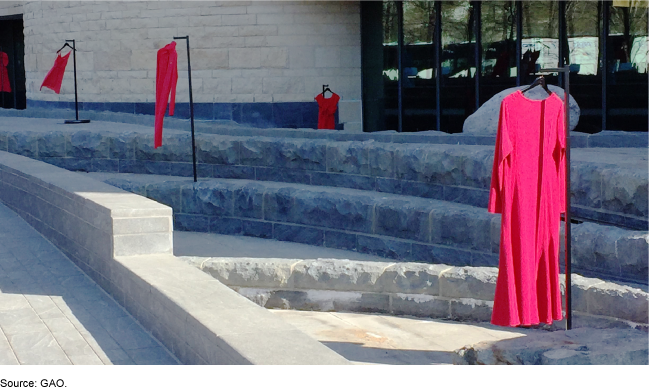 The total number of missing or murdered Indigenous women—referred to as American Indian and Alaska Native (AI/AN) women in this report— is unknown because, for several reasons, federal databases do not contain comprehensive national data on all AI/AN women reported missing. For example, federal law requires federal, state, and local law enforcement agencies—but not tribal law enforcement agencies—to report missing children under the age of 21, but not those over 21. In addition, instances of missing AI/AN women may be underreported due to mistrust of law enforcement and other reasons.

Implementation of data-related requirements in two laws, enacted in October 2020, present opportunities to increase and improve data on the number of missing or murdered Indians, including AI/AN women. For example, Savanna's Act requires tribal consultations on how to improve tribal data relevance and access to databases. The Department of Justice (DOJ) has taken some steps to analyze data in federal databases related to cases of missing or murdered AI/AN women, including publishing more detailed single-year statistics in 2020 on missing persons by race, gender, and age. However, data analyses efforts are in the early stages, and DOJ does not have a plan to continue these efforts past November 2021. Developing such a plan could provide DOJ and other stakeholders with information to better understand the nature of the missing or murdered AI/AN crisis and identify emerging trends.

Artist Installation of Red Dresses to Depict the Disappearances and Deaths of Indigenous Women, the National Museum of the American Indian, 2019

Relevant DOJ and Department of the Interior (DOI) law enforcement agencies that investigate cases of missing or murdered Indian women in Indian country have engaged in other efforts to address the crisis, but they have not implemented certain requirements to increase intergovernmental coordination and data collection in the two 2020 laws, which remain unfulfilled past their statutory deadlines. For example, the Not Invisible Act of 2019 requires the Secretary of the Interior, in coordination with the Attorney General, to appoint members to a Joint Commission on Reducing Violence Against Indians by February 7, 2021, but as of October 15, 2021, no members have been appointed, and a draft plan to meet this requirement does not include milestones for all interim steps. Developing plans to meet this and other unfulfilled statutory requirements would provide more assurance that DOJ and DOI will meet their legal responsibilities, and support tribal partners in reducing violent crime.

According to researchers, AI/AN women in the U.S. experience higher rates of violence than most other women, and tribal and federal officials have stated that this incidence of violence constitutes a crisis. Various federal officials and tribal stakeholders have raised concerns about challenges with cross-jurisdictional cooperation and a lack of comprehensive national data on cases.

GAO was asked to review the federal response to the missing or murdered AI/AN women crisis. This report examines the extent to which (1) the number of missing or murdered AI/AN women in the U.S. is known and (2) DOJ and DOI have taken steps to address the crisis. GAO reviewed available data on missing persons and violent deaths, relevant reports, and agency documentation, including agency policies and procedures. Using agency data—which were determined to be reliable for location selection—and qualitative factors, GAO selected seven locations to interview federal, state, local, and tribal law enforcement officials; tribal officials; and nongovernmental victim service providers on the federal response to the crisis.

GAO is making four recommendations, including that DOJ develop a plan for how it will accomplish ongoing analyses of missing or murdered AI/AN women data and that DOJ and DOI both develop plans to implement the requirements in Savanna's Act and the Not Invisible Act of 2019 that remain unfulfilled past their statutory deadlines. Both agencies concurred with our recommendations.