In recent decades, income and wealth disparities have been increasing among older Americans and exceed those in Canada, Germany, and the United Kingdom. We found:

In 2007, older Americans in a typical low-income household needed to work 12 years to equal what a typical high-income older household earned in 1 year; there were similar gaps in Germany, where they'd need to work 6 years, and 10 years in the U.K.

Higher income and wealth were associated with living longer in the U.S. and the U.K. for those under 80 years old

Homeownership and higher education were generally associated with higher wealth and income, respectively, in each country 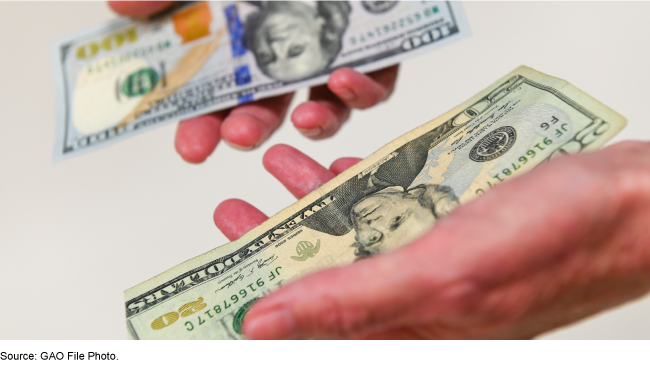 Median Income of Older Households in the U.S. and Selected Countries, by Quintile 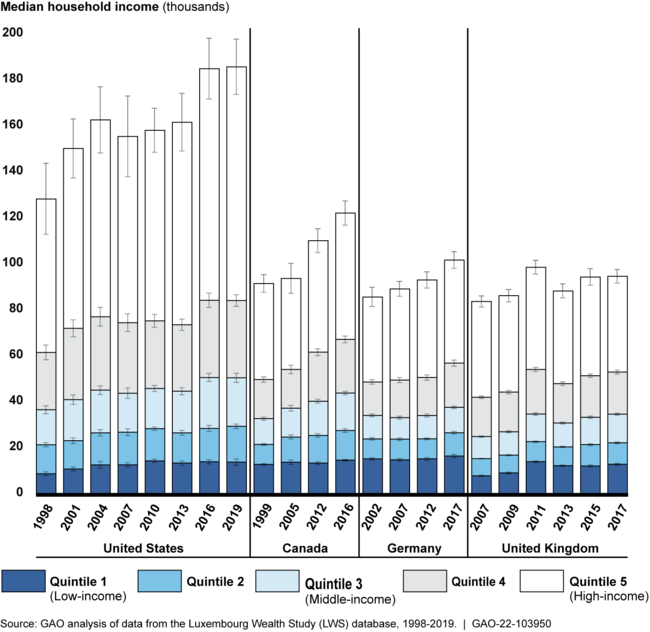 Note: GAO sorted households into quintiles based on income when the survey respondent, their partner or spouse, or both reported being 55 or older. For each quintile, GAO calculated median income, meaning the income of the “typical” household. GAO converted estimates to 2017 U.S. Dollar purchasing power parities, which were the most recent available at the time. Confidence intervals are reported at either the 99 or 95 percent level based on the availability of Luxembourg Wealth Study data.

Although the wealth data GAO reviewed indicate wider disparities in the United States than in selected countries over the period of review, these data did not include the estimated value of retirement benefits that older households expect to receive from public and private sources. GAO and some researchers have demonstrated how incorporating the value of these expected retirement benefits shows wealth disparities that are somewhat smaller than measures that omit these benefits.

GAO found that individuals from high-income and high-wealth households in the United States and United Kingdom were generally more likely to survive during the 10-year period compared to lower household income and wealth groups. For example, in the United States, the proportion of individuals in their seventies at the beginning of the study period who were alive at the end of the 10-year period ranged from 68 percent for those from the wealthiest households, to 44 percent for those from the least wealthy households. However, these patterns differed for the oldest individuals, who were in their eighties and nineties at the beginning of the study period. For example, survival rates for those in their nineties did not vary significantly based on wealth.

Educational attainment and homeownership in selected countries and the United States are associated with higher levels of income and wealth according to GAO's examination of data, review of research, and interviews. For example, in each of the selected countries, older households that have obtained postsecondary education tend to have higher incomes during their working years and subsequently higher levels of wealth during their older years. Homeownership is similarly associated with higher levels of wealth because, in part, a house serves as an asset that can increase in value, as well as a dwelling.

Other factors associated with income and wealth disparities include the cost of long-term care, which can quickly deplete the wealth of older households. However, research indicates that Germany mitigates the high costs of long-term care through nationwide long-term care insurance. Additionally, public retirement programs in selected countries and Social Security in the United States are designed in part to reduce disparities by providing a higher rate of payments to households with lower incomes. Similarly, income taxes in all three selected countries and the United States are designed in a way that can reduce income disparities, with marginal rates that increase by income.

Some researchers and policymakers have raised questions about whether differences in income, wealth, and longevity in the United States and other countries may affect older populations' financial security in retirement.

GAO was asked to compare income, wealth, and longevity trends in the United States and other countries. This report (1) compares trends in distributions of income and wealth, and disparities in survival rates for older households in the United States with those in Canada, Germany, and the United Kingdom; and (2) describes factors that contribute to any disparities in income and wealth distributions for older households in selected countries.

GAO selected countries based on the availability of comparable data and size of their economies. GAO analyzed the countries' distributions of income and wealth from 1998-2019 using the Luxembourg Wealth Study Database. GAO examined associations with 10-year survival rates in the United States and United Kingdom using data that followed older households from 2002-2012 in the English Longitudinal Study of Ageing and the Health and Retirement Study in the United States. GAO reviewed relevant literature, interviewed researchers and government officials in the selected countries, and sought input from the U.S. Census Bureau, Departments of Labor and the Treasury, Internal Revenue Service, and Social Security Administration.

In the U.S., Income and Wealth are Concentrated at the Top. Where Does This Leave Older Americans?

In the U.S., Income and Wealth are Concentrated at the Top. Where Does This Leave Older Americans?