The Department of Veterans Affairs relies on electronic health records for patient care, risk management for its patient population, and health research. VA started transferring records to a new system, which went live in October 2020.

We found problems with the quality of the transferred data and with how the new system was working for some users. For example: 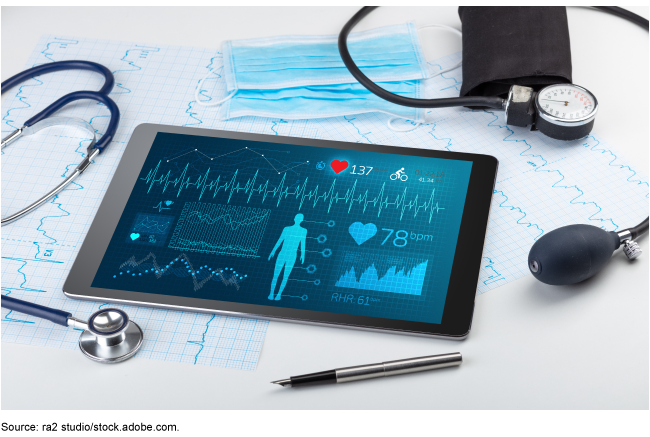 The Department of Veterans Affairs (VA) relies on health data in its electronic health record (EHR) system and Corporate Data Warehouse to support its mission. VA has undertaken an effort to replace its legacy EHR system with a commercial system developed by Cerner Government Services, Inc. (Cerner). As shown in the figure, health data management activities planned for the department's EHR modernization (EHRM) include the following:

VA has made progress toward implementing its planned data management activities. Consistent with its plans, the department migrated selected data to the new EHR system prior to the initial system deployment in October 2020. Although these efforts included testing intended to help ensure migrated data were accurate and matched expected results, VA's analyses and GAO's work indicated that clinicians experienced challenges with the quality of migrated data, including their accessibility, accuracy, and appropriateness. For example, a VA report issued after the initial deployment identified risks to patient safety in the new system related to incomplete data migration. The challenges occurred, in part, because the department did not establish performance measures and goals for migrated data quality. Until VA uses such measures and goals to better ensure the quality of migrated data, the department could deploy a new EHR system that does not meet clinicians' needs and poses risks to the continuity of patient care.

VA clinicians use health data to provide health care services to the nation's veterans. Stakeholders across the department also rely on health data to support reporting capabilities that can help monitor patient safety and measure the quality of care, among other things.

GAO was asked to review VA's EHRM data management plans. The objectives of this review included describing the department's plans for (1) migrating data to the new EHR system and determining the extent to which VA has implemented its plans and (2) continuity of reporting and determining the extent to which the department has implemented its plans.

GAO is making two recommendations to VA that it (1) establish and use performance measures and goals to ensure the quality of migrated data and (2) use a stakeholder register to identify and engage all relevant EHRM stakeholders to meet their reporting needs. VA concurred with GAO's recommendations.