States and the federal government share in financing Medicaid, a health care program for low-income and medically needy people. States mostly use their general funds to finance the nonfederal share, but they can also use funds from care providers and local governments. 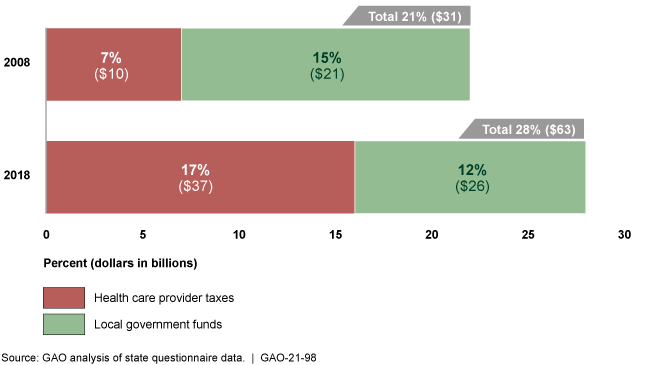 States and the federal government share in financing Medicaid, a health care program for low-income and medically needy individuals. States finance the nonfederal share with state general funds and other sources, such as taxes on health care providers and funds from local governments. GAO's analysis showed a change in how states finance their Medicaid programs. In particular, states relied on provider taxes and local government funds for about 28 percent, or $63 billion, of the estimated $224 billion total nonfederal share of Medicaid payments in state fiscal year 2018—7 percentage points more than state fiscal year 2008.

Note: Percentages do not add up due to rounding.

The Centers for Medicare & Medicaid Services (CMS)—which oversees Medicaid—collects some information on states' sources of funds and payments, but it is not complete, consistent, or sufficiently documented, which hinders the agency's oversight. For example, CMS does not require states to report on the source of the nonfederal share for all payments. Absent complete, consistent, and sufficiently documented information about all Medicaid payments, CMS cannot adequately determine whether payments are consistent with statutory requirements for economy and efficiency, and with permissible financing, such as the categories of services on which provider taxes may be imposed.

Medicaid cost $668 billion in fiscal year 2019. GAO has previously reported on concerns about states' use of various funding sources for the nonfederal share. Although such financing arrangements are allowed under certain conditions, they can also result in increasing the share of net costs paid by the federal government and decreasing reliance on state general funds.

GAO was asked to review the sources of funds states used for Medicaid and the types of payments made to providers. This report describes states' reliance on provider and local government funds for these arrangements; the estimated effect of these arrangements on the federal share of net Medicaid payments; and the extent to which CMS collects information on these arrangements. To do this work, GAO reviewed CMS information; administered a questionnaire to all state Medicaid agencies; analyzed the estimated effects of reliance on provider and local government funds; and interviewed CMS officials, as well as Medicaid officials in 11 states selected, in part, on Medicaid spending and geographic diversity.

The Administrator of CMS should collect and document complete and consistent information about the sources of funding for the nonfederal share of payments to providers. CMS neither agreed nor disagreed with GAO's recommendation, but acknowledged the need for additional financing and payment data for Medicaid oversight.