People had to travel farther to get health care services after rural hospitals closed in their areas. 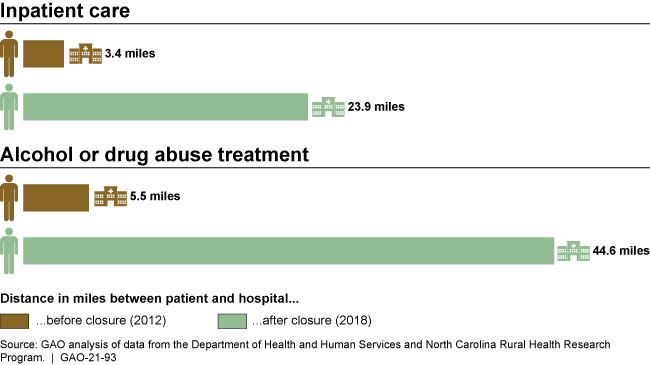 Median Distance in Miles from Service Areas with Rural Hospital Closures to the Nearest Open Hospital that Offered Certain Health Care Services, 2012 and 2018

Notes: GAO focused its analysis on the health care services offered in 2012 by the 64 rural hospitals that closed during the years 2013 through 2017 and for which data were available. For example, in 2012, 64 closed hospitals offered general inpatient services, 62 offered emergency department services, 11 offered treatment services for alcohol or drug abuse, and 11 offered services in a coronary care unit. To examine distance, GAO calculated “crow-fly miles” (the distance measured in a straight line) from the geographic center of each closed rural hospital's service area to the geographic center of the ZIP Code with the nearest open rural or urban hospital that offered a given service.

GAO was asked to examine the effects of rural hospital closures on residents living in the areas of the hospitals that closed. This report examines, among other objectives, how closures affected the distance for residents to access health care services, as well as changes in the availability of health care providers in counties with and without closures.

GAO analyzed data from the Department of Health and Human Services (HHS) and the North Carolina Rural Health Research Program (NC RHRP) for rural hospitals (1) that closed and those that were open during the years 2013 through 2017, and (2) for which complete data generally were available at the time of GAO's review. GAO also interviewed HHS and NC RHRP officials and reviewed relevant literature.

GAO defined hospitals as rural according to data from the Federal Office of Rural Health Policy. GAO defined hospital closure as a cessation of inpatient services, the same definition used by NC RHRP. GAO defined service areas with closures as the collection of ZIP Codes that were served by closed rural hospitals and service areas without closures as the collection of ZIP Codes served only by rural hospitals that were open.