Airplane manufacturers have cybersecurity controls in place and there haven't been reports of successful cyberattacks on commercial airplane IT systems to date. But evolving cyber threats and increasing connectivity between airplanes and other systems could put future flight safety at risk if the FAA doesn't prioritize oversight.

We recommended that the FAA strengthen cybersecurity oversight for airplanes. 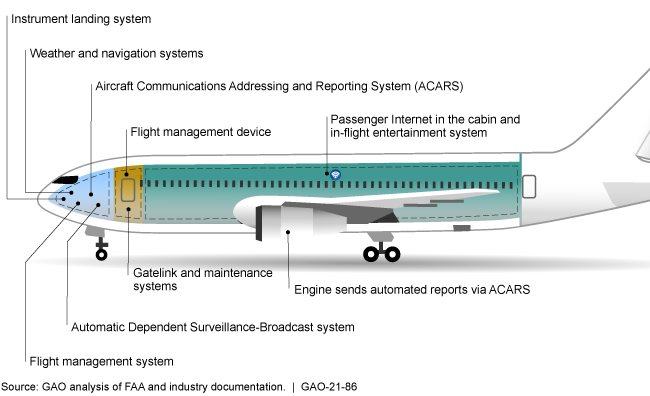 Modern airplanes are equipped with networks and systems that share data with the pilots, passengers, maintenance crews, other aircraft, and air-traffic controllers in ways that were not previously feasible (see fig. 1). As a result, if avionics systems are not properly protected, they could be at risk of a variety of potential cyberattacks. Vulnerabilities could occur due to (1) not applying modifications (patches) to commercial software, (2) insecure supply chains, (3) malicious software uploads, (4) outdated systems on legacy airplanes, and (5) flight data spoofing. To date, extensive cybersecurity controls have been implemented and there have not been any reports of successful cyberattacks on an airplane's avionics systems. However, the increasing connections between airplanes and other systems, combined with the evolving cyber threat landscape, could lead to increasing risks for future flight safety. 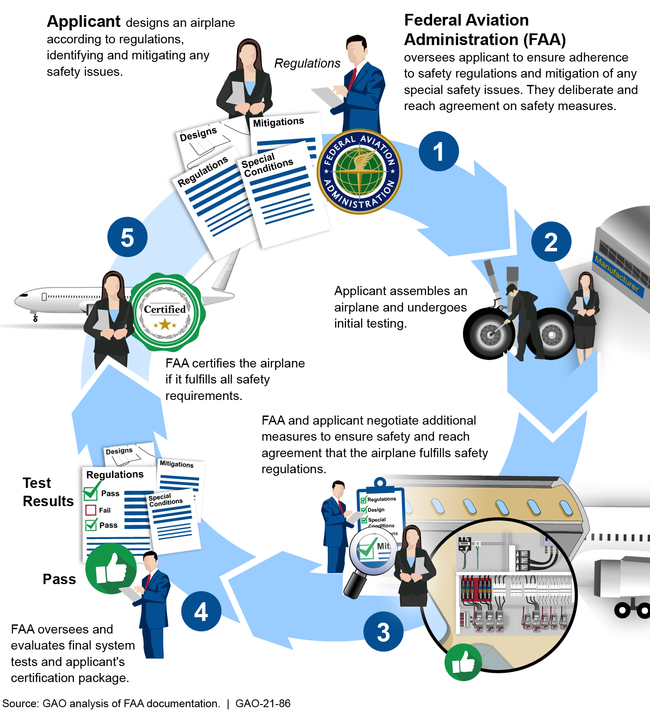 GAO has previously identified key practices for interagency collaboration that can be used to assess interagency coordination. FAA coordinates with other federal agencies, such as the Departments of Defense (DOD) and Homeland Security (DHS), and with industry to address aviation cybersecurity issues. For example, FAA co-chairs the Aviation Cyber Initiative, a tri-agency forum with DOD and DHS to address cyber risks across the aviation ecosystem. However, FAA's internal coordination activities do not fully reflect GAO's key collaboration practices. FAA has not established a tracking mechanism for monitoring progress on cybersecurity issues that are raised in coordination meetings, and its oversight coordination activities are not supported by dedicated resources within the agency's budget. Until FAA establishes a tracking mechanism for cybersecurity issues, it may be unable to ensure that all issues are appropriately addressed and resolved. Further, until it conducts an avionics cybersecurity risk assessment, it will not be able to effectively prioritize and dedicate resources to ensure that avionics cybersecurity risks are addressed in its oversight program.

Avionics systems, which provide weather information, positioning data, and communications, are critical to the safe operation of an airplane. FAA is responsible for overseeing the safety of commercial aviation, including avionics systems. The growing connectivity between airplanes and these systems may present increasing opportunities for cyberattacks on commercial airplanes.

To do so, GAO reviewed information on key cybersecurity risks to avionics systems, as reported by major industry representatives as well as key elements of an effective oversight program, and compared FAA's process for overseeing the implementation of cybersecurity controls in avionics systems with these program elements. GAO also reviewed agency documentation and interviewed agency and industry representatives to assess FAA's coordination efforts to address the identified risks.

Based on the assessment of avionics cybersecurity risks, GAO recommends that FAA

review and consider revising its policies and procedures for monitoring the effectiveness of avionics cybersecurity controls in the deployed fleet to include developing procedures for safely conducting independent testing.

ensure that avionics cybersecurity issues are appropriately tracked and resolved when coordinating among internal stakeholders.

review and consider the extent to which oversight resources should be committed to avionics cybersecurity.

FAA concurred with five out of six GAO recommendations. FAA did not concur with the recommendation to consider revising its policies and procedures for periodic independent testing. GAO clarified this recommendation to emphasize that FAA safely conduct such testing as part of its ongoing monitoring of airplane safety.