The U.S. electricity grid's distribution systems—the parts of the grid that carry electricity to consumers—are becoming more vulnerable to cyberattacks, in part because of the introduction of and reliance on monitoring and control technologies. However, the scale of potential impacts from such attacks is not well understood.

The Department of Energy is working on the energy sector portion of the national cybersecurity strategy, but it has focused its efforts more on risks facing the grid's generation and transmission systems. We recommended more fully addressing risks to distribution systems. 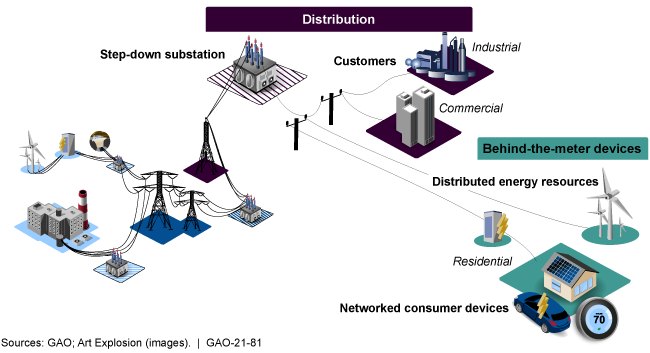 The U.S. grid's distribution systems—which carry electricity from transmission systems to consumers and are regulated primarily by states—are increasingly at risk from cyberattacks. Distribution systems are growing more vulnerable, in part because their industrial control systems increasingly allow remote access and connect to business networks. As a result, threat actors can use multiple techniques to access those systems and potentially disrupt operations. (See fig.) However, the scale of potential impacts from such attacks is not well understood. 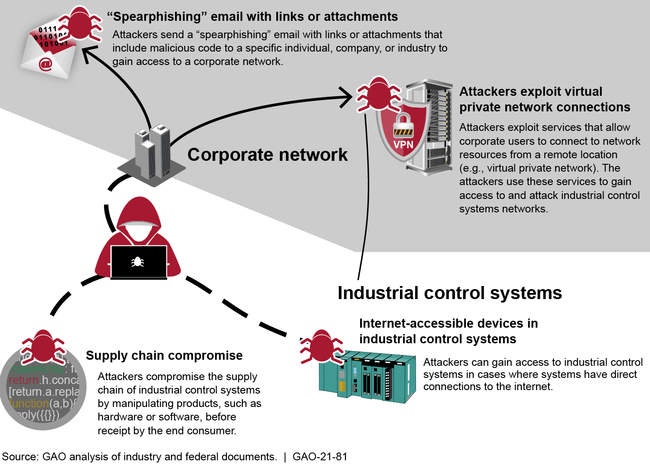 As the lead federal agency for the energy sector, the Department of Energy (DOE) has developed plans to implement the national cybersecurity strategy for the grid, but these plans do not fully address risks to the grid's distribution systems. For example, DOE's plans do not address distribution systems' vulnerabilities related to supply chains. According to officials, DOE has not fully addressed such risks in its plans because it has prioritized addressing risks to the grid's generation and transmission systems. Without doing so, however, DOE's plans will likely be of limited use in prioritizing federal support to states and industry to improve grid distribution systems' cybersecurity.

Protecting the reliability of the U.S. electricity grid, which delivers electricity essential for modern life, is a long-standing national interest. The grid comprises three functions: generation, transmission, and distribution. In August 2019, GAO reported that the generation and transmission systems—which are federally regulated for reliability—are increasingly vulnerable to cyberattacks.