If DOE classifies the residual waste in tanks as something other than high-level waste, and the state approves it, DOE can fill the tanks with grout and leave them in place. This could avoid some risks and save $18 billion. But DOE's legal authority to do this is unclear.

We recommended that Congress consider clarifying DOE's authority to manage the residual waste.

Example of a Single-Shell Tank at Hanford, WA 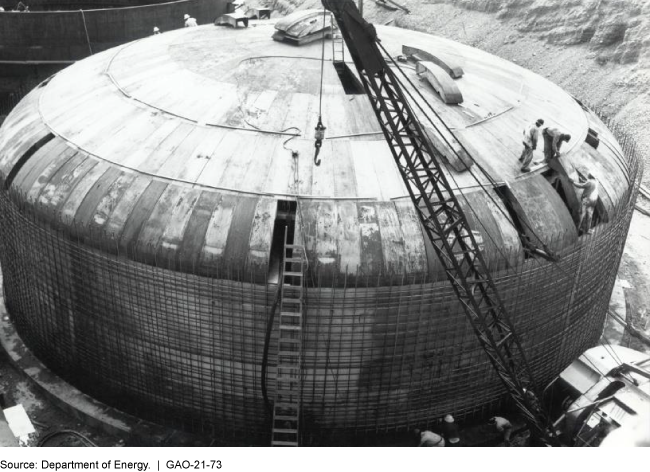 The Department of Energy (DOE) has retrieved nuclear waste from all the tanks at C-farm—the first of 18 tank farms (i.e., groupings of tanks) at DOE's Hanford site in southeastern Washington State. The waste is a byproduct of decades of nuclear weapons production and research. DOE is obligated under agreements with the state's Department of Ecology (Ecology) and the U.S. Environmental Protection Agency to move waste from older, single-shell tanks to newer, more durable, double-shell tanks and ultimately to dispose of it.

Another challenge DOE faces in closing C-farm is how to address contaminated soil caused by leaks or discharges of waste from the tanks. DOE and Ecology officials do not agree on a process for evaluating contaminated soil at C-farm or on what role NRC should play in this process. They interpret their agreement differently, particularly regarding whether NRC must review DOE's analysis of contaminated soil. If the two parties cannot resolve this issue, Ecology may deny DOE a permit for C-farm closure. By using an independent mediator to help reach agreement with Ecology on how to assess soil contamination, including NRC's role, DOE would be better positioned to avoid future cleanup delays.

DOE has not developed a long-term plan for tank-farm closure, in part, because a plan is not required. However, leading practices in program management call for long-term planning. In addition, DOE faces technical challenges that may take years to address as noted by representatives from various entities or tribal governments. For example, an internal DOE document states there is a 95 percent probability DOE will run out of space in its double shell tanks—space needed to continue retrieval operations. Planning for and building new tanks requires years of work. By developing a long-term plan, DOE could better prepare to address technical challenges.

The Hanford site in Washington State contains about 54 million gallons of nuclear waste, which is stored in 177 underground storage tanks. In fiscal years 1997 through 2019, DOE spent over $10 billion to maintain Hanford's tanks and retrieve waste from them. DOE expects to spend at least $69 billion more on activities to retrieve tank waste and close tanks, according to a January 2019 DOE report.

Senate Report 116-48, accompanying the National Defense Authorization Act for Fiscal Year 2020, included a provision for GAO to review the status of tank closures at Hanford. GAO's report examines the status of DOE's efforts to retrieve tank waste, challenges DOE faces in its effort to close the C-farm, as well as DOE's approach for closing the remaining tank farms.

Congress should consider clarifying DOE's authority at Hanford to determine, with NRC involvement, whether residual tank waste can be managed as a waste type other than HLW. GAO is also making three recommendations, including that DOE (1) use an independent mediator to help reach agreement with Ecology on a process for assessing soil contamination, including NRC's role and (2) develop a long-term plan for its tank waste cleanup mission at Hanford. DOE concurred with all three recommendations.