There are about 86,000 metric tons of spent nuclear fuel from commercial reactors stored at 75 U.S. sites. This amount continues to grow. Policymakers have been at an impasse over what to do with the spent fuel since the licensing of the Yucca Mountain repository stopped in 2010. Unable to meet its disposal commitment, the U.S. government has paid reactor owners about $9 billion for storage.

Experts told us a variety of actions are needed to move ahead, including authorization of a new effort to determine where a disposal facility should be located and the development of a management strategy. 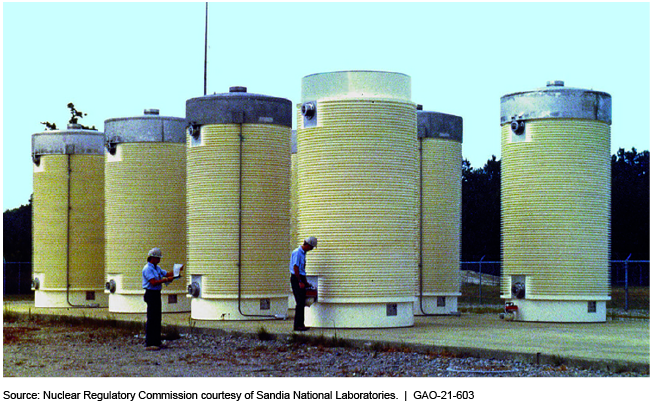 Congress needs to take action to break the impasse over a permanent solution for commercial spent nuclear fuel—used fuel removed from nuclear power reactors—according to experts GAO interviewed. Specifically, most experts said Congress should (1) amend the Nuclear Waste Policy Act of 1982 (NWPA) to authorize the Department of Energy (DOE) to implement a new consent-based process for siting consolidated interim storage and permanent geologic repository facilities, and (2) restructure the Nuclear Waste Fund to ensure reliable and sufficient funding. Experts highlighted concerns about the effect of the continuing impasse on environmental, health, and security risks; efforts to combat climate change; and taxpayer costs. For example, the amount the federal government will have to pay to owners to store spent nuclear fuel at reactor sites will continue to grow annually (see figure).

The United States currently has an ad hoc system for managing commercial spent nuclear fuel, which can affect future disposal decisions and costs. For example, spent fuel is stored using a variety of different technologies that will have implications for final disposal. Nearly all of the experts we interviewed said an integrated strategy is essential to developing a solution for commercial spent nuclear fuel and potentially reducing programmatic costs. However, DOE cannot fully develop and implement such a strategy without congressional action.

In 2015, DOE began efforts to engage the public and develop a draft consent-based siting process, but it has not finalized this process. The draft includes elements that nearly all experts agreed are critical for an effective siting process. Finalizing the draft could help position DOE to implement a consent-based process for consolidated interim storage facilities and/or permanent geologic repositories if Congress amends the NWPA to allow for storage and disposal options other than, or in addition to, the Yucca Mountain repository.

Commercial spent nuclear fuel is extremely dangerous if not managed properly. About 86,000 metric tons of this fuel is stored on-site at 75 operating or shutdown nuclear power plants in 33 states, an amount that grows by about 2,000 metric tons each year.

The NWPA, as amended, requires DOE to dispose of spent nuclear fuel and specifies that the only site that may be considered for the permanent disposal of commercial spent nuclear fuel is a geologic repository at Yucca Mountain, Nevada. However, in 2010, DOE terminated its efforts to license a repository at Yucca Mountain, and Congress stopped funding activities related to the site. Since then, policymakers have been at an impasse on how to meet the federal disposal obligation, with significant financial consequences for taxpayers.

This report examines actions that experts identified as necessary to develop a solution for spent nuclear fuel disposal. GAO reviewed DOE and other agency documents and interviewed 20 experts and 25 stakeholders from industry, nongovernmental organizations, and tribal and state groups.