In 2017, hurricanes knocked out Puerto Rico's electricity grid and caused an 11-month blackout—the longest in U.S. history. Efforts are underway to rebuild a more resilient grid.

FEMA has worked with Puerto Rico to assess grid damage, estimate costs, and more. FEMA recently committed about $10 billion to fund grid recovery but has not approved any long-term grid projects or given local entities clear information about how projects will likely be funded.

Two years after funds for grants were appropriated, the Department of Housing and Urban Development hasn't outlined eligibility or application information for these grants. 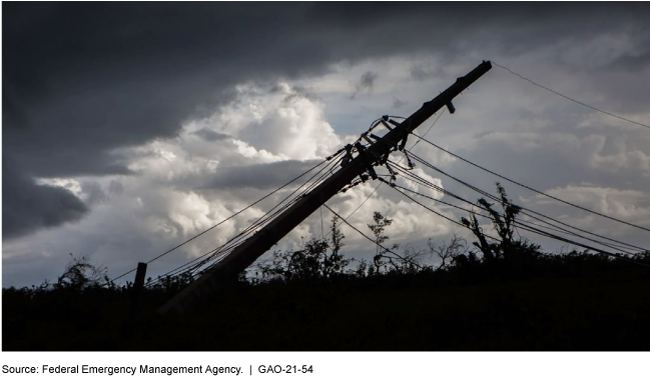 As of October 2020, 3 years since the hurricanes destroyed much of Puerto Rico's electricity grid, neither the Federal Emergency Management Agency (FEMA) nor the Department of Housing and Urban Development (HUD) had approved long-term grid recovery projects in Puerto Rico. In 2019, GAO made four recommendations to FEMA and HUD to address identified challenges in rebuilding the electricity grid in Puerto Rico. As of October 2020, FEMA had fully implemented one recommendation and partially implemented two others, while HUD had not implemented its recommendation. Specifically, FEMA established an interagency agreement with the Department of Energy (DOE) to clarify how the agencies would consult on recovery efforts. FEMA had taken actions to partially implement recommendations on improving coordination among federal and local agencies and providing information on industry standards. However, further steps are needed, including finalizing guidance on FEMA's process for approving funding for projects. Regarding HUD, it has not addressed GAO's recommendation to establish time frames and requirements for available funding.

Until HUD and FEMA implement GAO's recommendations, uncertainty will linger about how and when federal funding for long-term grid recovery will proceed. In particular, it is uncertain how available funding sources will support measures to enhance grid resilience to hurricanes, such as smart grid technology. FEMA officials told GAO that additional funding sources could be used for resilience measures but that this would not be determined until specific projects are submitted to FEMA for approval. Moreover, although FEMA finalized a $10 billion cost estimate for grid repairs in September 2020, several steps remain before FEMA approves funding for projects—a process officials said they were drafting. HUD funding could supplement FEMA funding but, as discussed above, HUD has yet to establish conditions for using these funds and has not established time frames and a plan for issuing this information. According to HUD officials, they plan to publish requirements in the first quarter of fiscal year 2021, but this depends on other factors, such as input from other federal agencies. Further delays in publishing the conditions could contribute to delays in Puerto Rico's ability to initiate grid recovery projects.

In 2017, Hurricanes Irma and Maria damaged Puerto Rico's electricity grid, causing the longest blackout in U.S. history. It took roughly 11 months after the hurricanes for power to be restored to all of the customers with structures deemed safe for power restoration. Since electricity service has been restored, local entities have undertaken the longer-term task of more fully repairing and rebuilding the grid. GAO reported in 2019 on challenges hindering progress in rebuilding the grid and recommended that FEMA and HUD take actions to address these challenges.

This report examines the status of efforts to support long-term grid recovery in Puerto Rico, including actions taken by FEMA and HUD to implement GAO's 2019 recommendations. For this report, GAO assessed agency actions; reviewed relevant reports, regulations, policies, and documents; and interviewed federal and local officials.

GAO previously made three recommendations to FEMA and one to HUD to provide needed information and improve coordination to support grid recovery. Both agencies disagreed with GAO's characterization of their progress made addressing these prior recommendations. GAO continues to believe additional actions are needed to fully implement these recommendations.