Armed groups in the Democratic Republic of the Congo and adjoining countries reportedly exploit the minerals tin, tungsten, tantalum, and gold to finance conflict in the region. The Securities and Exchange Commission requires companies to report on the origin of these "conflict minerals" used in their products.

We found that company inquiry results haven't changed much since 2015. In 2020:

Mined in Africa, finely ground coltan ore (from which tantalum is derived) is widely used in modern technology, such as cell phones and computers. 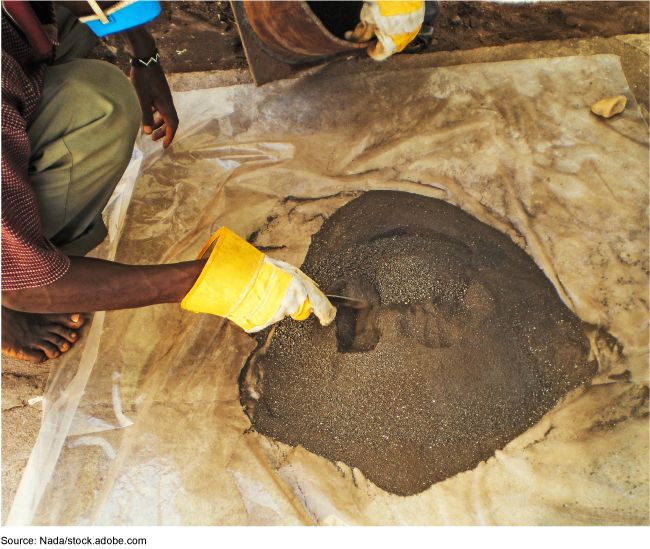 The Securities and Exchange Commission (SEC) disclosure rule on conflict minerals broadly requires that certain companies submit a filing that describes their efforts to determine the source of their conflict minerals—tin, tungsten, tantalum, and gold. As part of this process, these companies must conduct a reasonable country-of-origin inquiry (RCOI). Depending on the determination reached through this inquiry, some companies must then conduct due diligence to further investigate the source of their minerals.

According to GAO's analysis, companies' RCOI determinations have not changed significantly since 2015. In 2020, an estimated 58 percent of the companies that conducted an RCOI reported preliminary determinations regarding whether the conflict minerals in their products may have come from the Democratic Republic of the Congo (DRC) or adjoining countries (covered countries), as the figure shows. Of those companies, an estimated 42 percent reported that they had preliminarily determined that at least some of their minerals may have originated in covered countries, and an estimated 16 percent determined that their minerals were not from a covered country.

Most filings indicated that companies used standardized tools and programs to attempt to determine the source of their minerals, but filings and industry experts noted challenges relating to these tools and programs. For example, an estimated 96 percent of company filings indicated use of a supplier survey to collect information, but many companies did not receive responses from all their suppliers, of which there could be hundreds in some companies' supply chains.

The United States has sought to improve security in the DRC for over 2 decades. However, according to the Department of State and the United Nations, conflict has persisted and contributed to severe human rights abuses and the displacement of people. Armed groups continue to profit from the mining and trade of “conflict minerals,” according to State. Provisions in the 2010 Dodd-Frank Wall Street Reform and Consumer Protection Act required, among other things, the SEC to promulgate disclosure and reporting regulations regarding the use of conflict minerals from the DRC and adjoining countries. In 2012, the SEC adopted a conflict minerals disclosure rule requiring companies to file specialized disclosure reports beginning in 2014 and annually thereafter. The act also included a provision for GAO to assess, among other things, the SEC regulations' effectiveness in promoting peace and security in the DRC and adjoining countries.

This report examines how companies responded to the SEC conflict minerals disclosure rule when filing in 2020. GAO analyzed a generalizable sample of 100 SEC filings; reviewed SEC documents; and interviewed SEC officials and other stakeholders, including representatives from the private sector and nongovernmental organizations.