Under its policies, USAID tries to spend its money before the end of the next fiscal year following the obligation. We consider spending after that to be delayed. For selected accounts funded in FY 2009-2017, we found as much as $23 billion in delayed spending. Analyzing delayed spending could help USAID identify excess funds, which could be used for other projects.

USAID's Timely or Possibly Delayed Expenditures for Selected Funds Appropriated in Fiscal Years 2009-2017, as of March 31, 2020 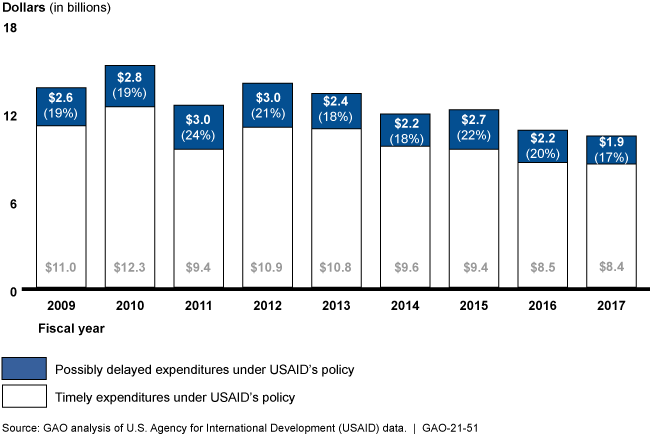 Almost $20 billion of the $185 billion (11 percent) that the U.S. Agency for International Development (USAID) obligated from funds appropriated in fiscal years 2009–2019 remained unliquidated (or not yet expended), as of March 31, 2020. Funds appropriated for Development Assistance (DA), Economic Support Fund (ESF), and Global Health Programs (GHP) made up about 78 percent of these unliquidated obligations (ULO).

Note: GAO's analysis is based on USAID's data on subobligations, and obligations made outside of bilateral agreements. GAO defines these expenditures as delayed under USAID's forward funding policy, but the funds remain legally available for expenditure for the entire period of availability for obligation plus 5 fiscal years after the period of availability for obligation has expired, in accordance with the account closing law. See 31 U.S.C. §§ 1552(a) and 1553(a).

USAID has processes for monitoring ULOs but does not analyze data on what GAO refers to as the timeliness of expenditures under its policy. USAID monitors ULOs by completing quarterly financial reviews, among other activities. However, USAID does not analyze data to identify (1) expenditures that occur after the fiscal year following obligation and (2) exceptions to timelines established in its policy. Doing so could enable USAID to make more informed resource decisions.

USAID officials cited various factors that contribute to expenditure delays and possible excess ULOs, and USAID has taken some steps to manage them. USAID officials cited external factors such as political changes and internal factors such as reform initiatives, as contributing to increased ULOs. In response, USAID has launched an automated deobligation tool, among other steps taken.

Congress provides foreign assistance funding through various appropriation accounts for international development projects. USAID is the primary U.S. agency responsible for implementing these projects and may have up to 11 fiscal years to expend its appropriations from certain accounts. USAID requires program managers to follow its forward funding policy, with some exceptions, and annually monitor ULOs to identify excess funds that may be eligible for deobligation and used for other purposes.

A Senate report provides for GAO to consult with the appropriations committee on a review of USAID's expenditure rates. This report examines (1) USAID data on ULOs for funds appropriated in fiscal years 2009–2019, (2) the extent to which expenditures in selected accounts met our definitions of timely or delayed under USAID policy, (3) the extent to which USAID monitors ULOs and the timeliness of expenditures, and (4) factors that USAID cites as contributing to expenditure delays and excess ULOs and steps taken to manage them. GAO analyzed financial data—primarily for DA, ESF, and GHP—reviewed USAID policies, and interviewed officials in Washington, D.C., and at three missions with large amounts of ULOs.

GAO is making three recommendations, including that USAID should routinely analyze data on (1) the timeliness of expenditures and (2) exceptions granted under its policy. USAID generally agreed with these recommendations.