In 2018, substances related to fentanyl—a very potent synthetic opioid—were temporarily classified as "Schedule I." This designated them as illicit drugs with high abuse potential and no medical use.

This classification has likely affected research, law enforcement, and more. For example, a Schedule I classification may discourage criminal activity, but it can also make it harder for researchers to study a drug.

There are a few ways to classify fentanyl-related drugs once the temporary classification expires in May 2021. For each option, we identified possible tradeoffs (such as complicating law enforcement or making research easier).

Comparison of a potentially lethal dose of fentanyl to a U.S. penny 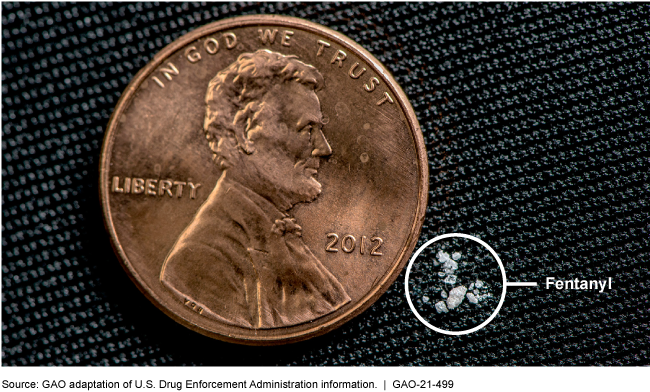 In 2018, the Drug Enforcement Administration (DEA) temporarily classified fentanyl-related substances as Schedule I under the Controlled Substances Act, based on their chemical structure, designating them illicit drugs with high abuse potential and no medical use. GAO identified possible considerations for scheduling decisions when the temporary classification expires on May 6, 2021.

Schedule as a class without modifications. The current temporary scheduling order could be made permanent, such as through legislative scheduling.

Legislatively schedule as a class with modifications. Fentanyl-related substances could be legislatively scheduled with modifications to the temporary scheduling order. Potential modifications include those recommended by an interagency workgroup convened by the Office of National Drug Control Policy (ONDCP), such as removing barriers to research and streamlining the process for removing substances from Schedule I if they are discovered to have no abuse potential.

This is a public version of a sensitive report GAO issued in April 2021. Information on China's class-wide scheduling that DOJ deemed sensitive has been omitted from this report.

Fentanyl-related substances are powerful synthetic opioids that can be significantly more potent than morphine. The number of deaths from fentanyl-related substances is unknown, but the Centers for Disease Control and Prevention reports that there were more than 50,000 deaths involving all synthetic opioids in the 12-month period ending July 2020.

In written comments, ONDCP noted the report identifies the issues to be considered for scheduling. DOJ and the Federal Public and Community Defenders commented on the report's emphasis on different stakeholder perspectives. GAO addressed these comments as appropriate and incorporated technical comments from ONDCP, HHS, DHS, and DOJ.