The Waste Isolation Pilot Plant in New Mexico is the nation's only repository for certain waste from nuclear weapons research and production.

The facility is expected to run out of disposal space by 2025. The Department of Energy plans to expand it, but work may not be completed before existing space is full.

Accidents in 2014 reduced the plant's operations, and Energy is constructing a new ventilation system so that full operations can resume. This work has been delayed and the office managing it has many vacancies.

We recommended that Energy improve its planning for adding space and analyze what additional incentives could help fill vacancies. 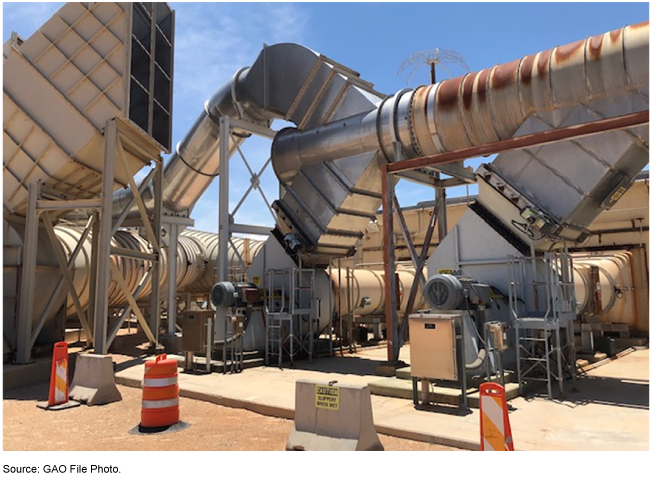 The Department of Energy's (DOE) plans for the Waste Isolation Pilot Plant (WIPP) may ensure sufficient statutory capacity and physical space to meet its disposal needs for the defense-related transuranic (TRU) waste in its current inventory. To reduce the volumes counted against the statutory limit, DOE implemented a new counting method that excludes some of the air space found in certain waste packages (see fig.). The new method has been approved by the New Mexico state regulator. However, DOE may not have sufficient statutory capacity and physical space to meet future TRU waste disposal needs at WIPP if significant volumes of TRU waste are added to DOE's TRU waste inventory, as anticipated, or if the new counting method is successfully challenged in court.

DOE officials identified two challenges to completing key ventilation projects needed to return WIPP to full disposal operations: (1) overseeing contractors executing the projects and (2) obtaining regulatory approvals. According to the workforce plan for DOE's Carlsbad Field Office, it may not have sufficient staff to address these challenges. The Carlsbad Field Office is responsible for project oversight, among other things, and 27 of the office's 76 total positions were either vacant or occupied by acting officials as of January 2020. DOE has taken some steps to address these staffing shortages; however, DOE has not fully analyzed options to address the vacancy issue. By doing so, DOE will be in a better position to address the challenges it has identified to effectively completing the projects at WIPP.

DOE does not have assurance that WIPP's planned additional physical space will be constructed before existing space is full, which would result in a potential interruption to disposal operations. GAO assessed DOE's Integrated Master Schedule—which includes DOE's estimate for completing some of WIPP's additional physical space—against best practices for schedule estimating. GAO found that the schedule did not substantially meet all four characteristics of a reliable schedule; to be considered reliable, a schedule must at least substantially meet all four. By improving the schedule, DOE will have greater assurance in the reliability of its estimate for completing additional physical space before existing space is full, thereby avoiding interruptions to disposal operations.

DOE's WIPP is the nation's only deep geologic repository for the disposal of defense-related nuclear waste. DOE suspended operations at WIPP after two accidents in 2014 and resumed on a limited scale in 2017. DOE has initiated two projects to improve WIPP's underground ventilation system and allow full disposal operations to resume. However, DOE estimates WIPP's existing physical space will be full around 2025, and DOE faces a statutory limitation on how much waste can be disposed of at WIPP.

Senate Report No. 115-125 accompanying a bill for the National Defense Authorization Act for Fiscal Year 2018 includes a provision for GAO to review DOE's actions to bring WIPP towards full operational status. This report examines DOE's (1) plans to meet needs for physical space at WIPP without exceeding WIPP's statutory capacity, (2) challenges to completing key ventilation projects, and (3) plans for adding physical space at WIPP without interruption to operations.