Federal agencies (such as Customs and Border Protection and the Animal Plant and Health Inspection Service) oversee inspections at U.S. ports of entry to protect U.S. agriculture from pests and diseases.

CBP and APHIS created a task force to coordinate inspections, as well as a joint strategic plan for 2014-2019. But we found that:

We recommended CBP and APHIS report on the task force's progress, update its strategic plan, and that CBP update guidance on communication. 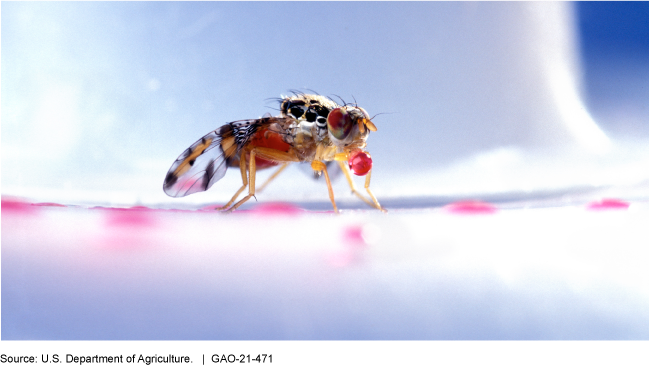 The Department of Homeland Security's U.S. Customs and Border Protection (CBP) and the U.S. Department of Agriculture's (USDA) Animal and Plant Health Inspection Service (APHIS) oversee inspections of imported agricultural products to protect the U.S. agricultural industry and environment. For example, in 2020, CBP inspectors intercepted egg masses of the Asian gypsy moth, a pest that poses a threat to fruit trees and other plants. CBP and APHIS also work to prevent the introduction of diseases such as African swine fever, which could cause billions of dollars in damage to the U.S. pork supply.

CBP and APHIS created the Joint Agency Task Force (JATF) to coordinate on inspections and a joint strategic plan for 2014–2019. The JATF has not updated its strategic plan; as a result, the plan's objectives are not current. According to CBP, the agencies took action to complete the objectives. For example, CBP's deployment of digital microscopes completed an objective to leverage technology to identify pests. However, the JATF has not reported on its progress toward meeting the objectives in its 2014–2019 plan. GAO has previously found that progress reports can help hold agencies accountable for achieving results. Developing a progress report would allow the JATF to document its progress and would provide valuable information to inform development of an updated strategic plan. Without assessing the JATF's progress and updating its strategic plan, CBP and APHIS cannot ensure that the JATF's objectives reflect the most current or urgent matters affecting imported agriculture.

According to CBP officials, CBP guidance directs its inspectors to contact inspectors with the Department of the Interior's Fish and Wildlife Service (FWS) about wildlife encountered during inspections of imported animals. CBP and FWS inspectors said that they have a collaborative working relationship, but some CBP inspectors described miscommunication with FWS at ports of entry because they did not have sufficient contact information. CBP officials told GAO that CBP supervisors at the ports of entry are responsible for ensuring their inspectors follow CBP's guidance, which includes whom to contact at FWS. However, GAO found that the most recent updates of this guidance ranged from 2009 to 2020. By reviewing and updating existing communication guidance where necessary, CBP could help address any gaps in communication between CBP and FWS inspectors at ports of entry.

The act includes a provision that GAO review federal efforts to address risks to the agricultural supply. This report examines, among other things, how federal agencies coordinate responsibilities for inspection of imported agriculture. GAO reviewed agency documents and interviewed agency officials and agency inspectors working at large and small ports of entry.