The Department of Defense offers programs and services that can help active-duty servicemembers who foster or adopt a child. But, most military foster and adoptive families aren't aware of all of the help they can get from DOD.

In addition, key parts of DOD's guidance are inconsistent with regulations on enrolling foster children in the military benefits system. Enrollment personnel's lack of experience with foster and pre-adoptive cases also may limit access to these services. As a result, some families may be missing out on services they are eligible for.

We recommended actions that DOD can take to address these issues. 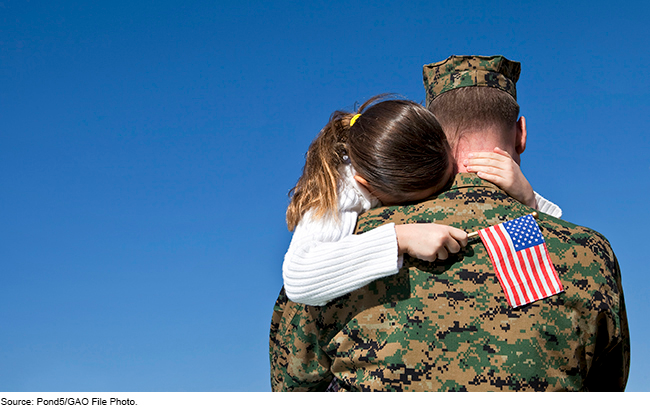 DOD, the Department of Health and Human Services (HHS), and selected state and local agencies provide some targeted supports to assist military families who foster or adopt, such as adoption-related leave (see figure). Other DOD supports, such as non-medical counseling and Children and Youth programs, are available to all military families, including foster and adoptive families. However, military and child welfare officials and families GAO interviewed reported limited awareness of available military supports, which are spread across multiple programs and offices. Absent efforts to centralize and promote available supports, DOD may be missing an opportunity to meet the needs of foster and adoptive families.

Targeted and Other Supports Available to Military Foster and Adoptive Families

Almost all military families GAO interviewed reported frequent moves, deployments, or enrollment in DOD's benefits system as challenges to fostering and adopting. Many families said moves or deployments resulted in delays or interruptions in the foster or adoption process, which child welfare officials GAO interviewed said they were sometimes able to mitigate, such as by expediting the adoption process or allowing a deployed parent to complete required training virtually. In addition, 12 of the 29 families GAO interviewed reported challenges enrolling their foster or pre-adoptive child in the DOD system that allows the child to obtain certain military benefits and services, which they said caused delays or prevented many families from accessing such services. DOD issued guidance on enrolling children in its system, but we found key parts of the guidance related to enrolling foster children to be inconsistent with DOD regulations. In addition, most DOD officials GAO spoke with at selected installations who are responsible for enrollments said they have little experience enrolling either foster or pre-adoptive children. Until DOD revises the guidance on enrolling foster children to ensure consistency with regulations and promotes awareness of eligibility and documentation requirements for enrolling both foster and pre-adoptive children in DOD's benefits system, foster and adoptive families may continue to face challenges obtaining services for which they are eligible.

Active-duty servicemembers in the U.S. military may expand their family by fostering or adopting a child from the foster care system, or through a private adoption. A U.S. House of Representatives Committee report accompanying the National Defense Authorization Act for Fiscal Year 2020 included a provision for GAO to examine these families.

This report examines (1) the number and characteristics of military foster and adoptive servicemembers, (2) what foster- and adoption-related supports federal, and selected state and local agencies provide to military families and families' use of supports, and (3) challenges these families face. GAO reviewed relevant federal laws, regulations, and guidance and analyzed data on active-duty servicemembers. GAO conducted virtual visits with officials at a nongeneralizable group of four military installations, and with officials at state and local agencies involved in foster care and adoption in four states, selected for a high number of active-duty members and varying installation sizes and geographic locations. GAO held virtual discussion groups with 29 military foster and adoptive families. GAO also interviewed officials from DOD, HHS, and national organizations.