Climate change is expected to affect every aspect of the electricity grid—from generation, transmission, and distribution, to demand for electricity. For example, more frequent droughts and changing rainfall patterns may diminish hydroelectricity in some areas, and increasing wildfires may damage transmission lines.

We testified about how the Department of Energy and the Federal Energy Regulatory Commission could enhance grid resilience. We recommended that DOE develop a strategy for doing so and coordinate efforts within the department, and that FERC assess grid risks and plan how to promote resilience. 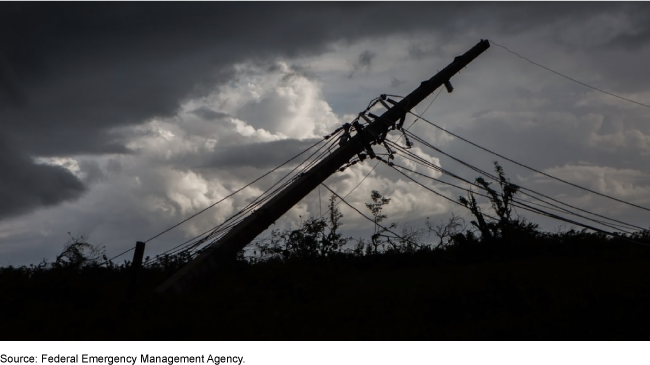 Climate change is expected to have far-reaching effects on the electricity grid that could cost billions and could affect every aspect of the grid from generation, transmission, and distribution to demand for electricity, according to several reports GAO reviewed. The type and extent of these effects on the grid will vary by geographic location and other factors. For example, reports GAO reviewed stated that more frequent droughts and changing rainfall patterns may adversely affect hydroelectricity generation in Alaska and the Northwest and Southwest regions of the United States. Further, transmission capacity may be reduced or distribution lines damaged during increasing wildfire activity in some regions due to warmer temperatures and drier conditions. Moreover, climate change effects on the grid could cost utilities and customers billions, including the costs of power outages and infrastructure damage.

Examples of Climate Change Effects on the Electricity Grid

Since 2014, the Department of Energy (DOE) and the Federal Energy Regulatory Commission (FERC) have taken actions to enhance the resilience of the grid. For example, in 2015, DOE established a partnership with 18 utilities to plan for climate change. In 2018, FERC collected information from grid operators on grid resilience and their risks to hazards such as extreme weather. Nevertheless, opportunities exist for DOE and FERC to take additional actions to enhance grid resilience to climate change. For example, DOE identified climate change as a risk to energy infrastructure, including the grid, but it does not have an overall strategy to guide its efforts. GAO's Disaster Resilience Framework states that federal efforts can focus on risk reduction by creating resilience goals and linking those goals to an overarching strategy. Developing and implementing a department-wide strategy that defines goals and measures progress could help prioritize DOE's climate resilience efforts to ensure that resources are targeted effectively. Regarding FERC, it has not taken steps to identify or assess climate change risks to the grid and, therefore, is not well positioned to determine the actions needed to enhance resilience. Risk management involves identifying and assessing risks to understand the likelihood of impacts and their associated consequences. By doing so, FERC could then plan and implement appropriate actions to respond to the risks and achieve its objective of promoting resilience.

According to the U.S. Global Change Research Program, changes in the earth's climate are under way and expected to increase, posing risks to the electricity grid that may affect the nation's economic and national security. Annual costs of weather-related power outages total billions of dollars and may increase with climate change, although resilience investments could help address potential effects, according to the research program. Private companies own most of the electricity grid, but the federal government plays a significant role in promoting grid resilience—the ability to adapt to changing conditions; withstand potentially disruptive events; and, if disrupted, to rapidly recover. DOE, the lead agency for grid resilience efforts, conducts research and provides information and technical assistance to industry. FERC reviews mandatory grid reliability standards.

In its report, GAO made two recommendations (1) that DOE develop a department-wide strategy to enhance grid resilience to climate change, and (2) that FERC identify and assess climate change risks to the grid. The agencies neither agreed nor disagreed.