Under the Military Housing Privatization Initiative, private developers assumed primary responsibility for building and maintaining military family housing in the U.S. In recent years, natural disasters have caused millions of dollars in damage to this housing. This has raised questions about the financial viability of these projects.

We made 7 recommendations to address these issues.

Hurricane Florence damaged this building at Marine Corps Base Camp Lejeune in North Carolina in 2018. 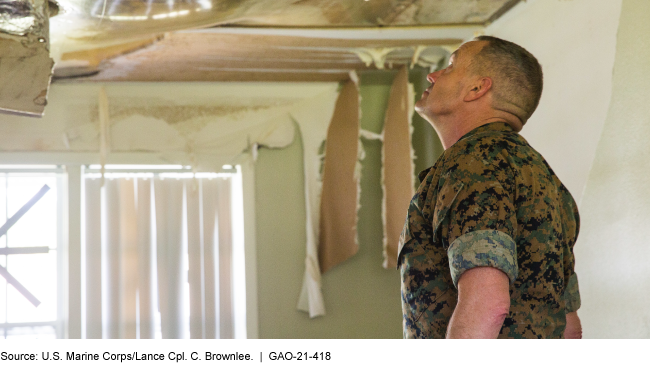 This is a public version of a sensitive report that GAO issued in February 2021. Much of the business and financial information in GAO's February 2021 report has been omitted because it was deemed sensitive by DOD.

The property insurance carried by three Department of Defense (DOD) privatized housing projects that GAO reviewed covered most of the natural disaster losses from December 2016 to December 2019. However, the extent of the losses at Tyndall Air Force Base, Florida, and Marine Corps Base Camp Lejeune, among other installations in North Carolina, created financial challenges for those installations' respective privatized housing projects. These challenges relate to the extent of the shortfalls between net expected insurance proceeds compared to estimated repair costs. The military departments and private developers responsible for these projects have taken, or are engaged in, actions to support their respective projects' natural disaster recovery.

The military departments have conducted reviews of private developers' property insurance for selected projects, but their procedures would benefit from improvements. For example, the Air Force did not have procedures for requiring timely resolution of any discrepancies between insurance coverage and requirements. Further, the Navy has not documented its conducted insurance reviews.

OSD has not regularly monitored the military departments' implementation of insurance requirements, including the results of their insurance reviews. However, while a draft of a sensitive version of this report was with DOD for comment, OSD issued a new policy memorandum, effective January 2021, requiring such regular insurance reporting. Effective implementation of this action should improve DOD's oversight of privatized housing projects.

Natural disasters, such as hurricanes and wind and hail storms, have caused millions of dollars in damage to privatized housing at military installations across the United States. GAO has also identified fiscal exposure to climate risks as a High Risk area. Since the mid-1990s, DOD has worked with private developers to construct, maintain, and repair housing at U.S. military installations through partnerships known as privatized housing projects. Damage from natural disasters has raised questions about the financial viability of the affected projects, the insurance they carry, and their funding structure.

The National Defense Authorization Act for Fiscal Year 2020 included a provision that GAO review privatized housing projects affected by natural disasters from December 20, 2016, to December 20, 2019. This report (1) describes how the insurance carried by three privatized housing projects affected their financial viability after natural disasters, and (2) assesses, among other things, the extent to which the military departments and OSD exercised oversight of the projects' property insurance coverage. GAO analyzed damage and financial data on three selected projects; reviewed guidance and insurance documents; and interviewed DOD officials and private developer representatives.

GAO made 7 recommendations in a sensitive version of this report, including that the military departments improve their insurance review oversight procedures. DOD concurred with the recommendations.