We have long-standing concerns about the Food and Drug Administration's ability to oversee the increasingly global pharmaceutical supply chain, an issue on our High Risk List since 2009. This testimony discusses some of those concerns and FDA's inspection activities during the COVID-19 pandemic.

Has paused most inspections since March 2020 to safeguard its employees

Used alternative inspection tools to oversee drug manufacturing quality, such as relying on foreign regulators and sampling and testing drugs—these are not a comprehensive or long-term substitute for inspections

Faces a backlog of inspections in future years 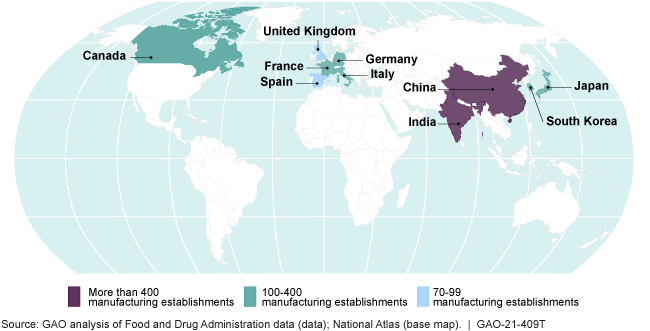 FDA has used alternative inspection tools to maintain some oversight of drug manufacturing quality while inspections are paused. These tools include relying on inspections conducted by foreign regulators, requesting and reviewing records and other information, and sampling and testing drugs. FDA has determined that inspections conducted by certain European regulators are equivalent to and can be substituted for an FDA inspection. Other tools provide useful information but are not equivalent. In addition, FDA was unable to complete more than 1,000 of its planned fiscal year 2020 inspections and will likely face a backlog of inspections in future years. In January 2021, GAO recommended that FDA ensure that inspection plans for future fiscal years respond to the issues presented by the backlog and that FDA fully assess the agency's alternative inspection tools. FDA concurred with both recommendations.

GAO has had long-standing concerns about FDA's ability to oversee the increasingly global pharmaceutical supply chain, an issue highlighted in GAO's High Risk Series since 2009.

This statement is largely based on GAO's Drug Manufacturing Inspections enclosure in its January 2021 CARES Act report, as well as GAO's December 2019 and June 2020 testimonies. Specifically, it discusses (1) the number of FDA's foreign inspections, (2) FDA's response to the COVID-19 pandemic pause in inspections, and (3) persistent foreign inspection challenges. For that work, GAO examined FDA data from fiscal years 2012 through 2020, interviewed FDA investigators, and reviewed documents related to drug oversight during the COVID-19 pandemic, among other things.