Drug manufacturers advertise to encourage consumers to ask their doctors for specific medications. From 2016-18, Medicare and its beneficiaries spent $560 billion on drugs—more than half on drugs that were advertised. Nearly half of all ad dollars centered on drugs to treat chronic medical conditions like arthritis, diabetes, and depression.

Most advertising was for brand-name drugs with about 2/3 of ad dollars spent on just 39 drugs. Drug manufacturers also spent more on advertising to coincide with a drug's launch (about half of ad dollars promoted newly marketed drugs) or advances in a drug's development. 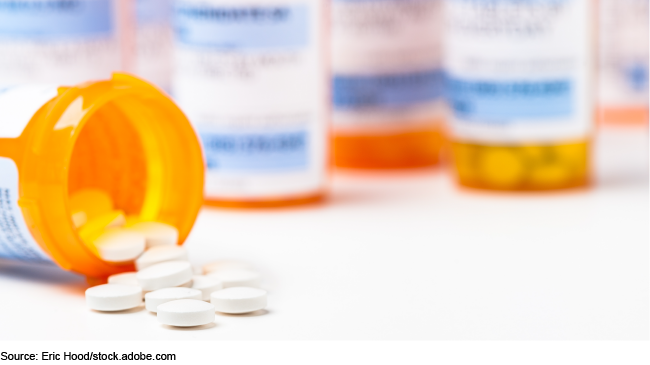 Drug manufacturers spent $17.8 billion on direct-to-consumer advertising (DTCA) for 553 drugs from 2016 through 2018, and spending was relatively stable at about $6 billion each year. Almost half of this spending was for three therapeutic categories of drugs that treat chronic medical conditions, such as arthritis, diabetes, and depression. GAO also found that nearly all DTCA spending was on brand-name drugs, with about two-thirds concentrated on 39 drugs, about half of which entered the market from 2014 through 2017.

Medicare Parts B and D and beneficiaries spent $560 billion on drugs from 2016 through 2018, $324 billion of which was spent on advertised drugs. Of the 553 advertised drugs, GAO found Medicare Parts B and D spending for 104 and 463 drugs, respectively. Among the drugs with the highest Medicare spending, some also had the highest DTCA spending. Specifically, among the top 10 drugs with the highest Medicare Parts B or D expenditures, four were also among the top 10 drugs in advertising spending in 2018: Eliquis (blood thinner), Humira (arthritis), Keytruda (cancer), and Lyrica (diabetic pain). 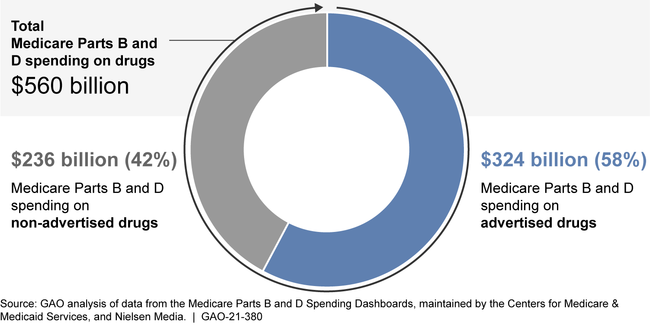 GAO's review of four advertised drugs found that drug manufacturers changed their DTCA spending during key events, such as increasing spending when a drug was approved to treat additional conditions or decreasing spending following the approval of generic versions. GAO also found that DTCA may have contributed to increases in Medicare beneficiary use and spending among four selected drugs from 2010 through 2018. However, other factors likely contributed to a drug's Medicare beneficiary use and spending, making it difficult to isolate the relationship between drug advertising, use and spending. For example, GAO's review of four selected drugs showed that increases in unit prices were a factor, while stakeholders GAO interviewed cited other contributing factors such as doctors' prescribing decisions and manufacturers' drug promotions directed to doctors.

Drug manufacturers use advertising on television and in other media to promote the use of their drugs to consumers and to encourage them to visit their doctors for more information. From 2016 through 2018, the Medicare program and beneficiaries spent $560 billion on drugs, and spending is projected to increase with the use of newer, more expensive drugs and an increase in beneficiaries.

GAO analyzed DTCA spending data from Nielsen Media, and Medicare Parts B and D Drug Spending Dashboard data, from 2016 through 2018 (the most recent available data at the time of GAO's analysis). GAO also analyzed DTCA spending and Medicare data for a non-generalizable selection of four advertised drugs over a longer period—from 2010 through 2018. The four drugs were selected to reflect differences in DTCA and Medicare spending, beneficiary use, and medical conditions treated. GAO also interviewed or obtained information from officials representing 14 stakeholder groups (including research, trade, and physician organizations; and drug manufacturers of the four selected drugs) about DTCA spending and drug use and spending.