About 1.7 million people—mostly in Sub-Saharan Africa—were newly infected with HIV in 2019. The region has experienced significant population growth, including among youth, who are more vulnerable to acquiring HIV infections.

The U.S. President's Emergency Plan for AIDS Relief provided about $6 billion annually for efforts to combat HIV from FY 2015-20.

We found that the program should ensure its program-level budget data is complete and accurate, including in reports to Congress. We recommended it establish procedures and a plan to improve data quality, and assess long-term resource needs (given factors like the growing youth population).

The President’s Emergency Plan for AIDS Relief (PEPFAR) supported activities to combat HIV/AIDS in 54 countries as of FY 2020. 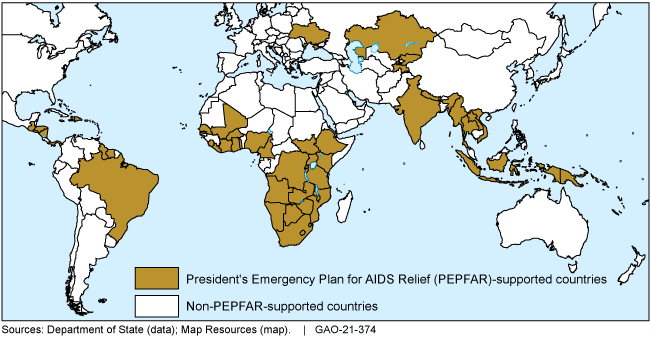 While HIV infection rates have declined in Sub-Saharan Africa since 2010, the doubling of the youth population—a group particularly vulnerable to acquiring new HIV infections—partially offset the rate of decline, according to the Joint United Nations Program on HIV/AIDS (UNAIDS). The youth population in Sub-Saharan Africa is growing as part of overall population growth, which more than doubled from 1990 to 2020 and is projected to nearly double again by 2050.

The Department of State, through the President's Emergency Plan for AIDS Relief (PEPFAR), allocated an estimated $4 billion from fiscal years 2016 through 2020 to three key interventions that officials identified as PEPFAR's response to reach the growing youth population. These interventions aim to address the cycle of HIV transmission among youth. For example, through MenStar, PEPFAR aims to treat HIV-positive men to prevent HIV transmission.

State's Office of the Global AIDS Coordinator (S/GAC) lacks procedures to reasonably assure PEPFAR program-level budget data, including data for congressional reporting, are reliable for a resource trends analysis to inform future programing. Specifically, GAO found issues with data completeness and accuracy. Officials said they are taking steps to improve data quality, but the steps do not fully address the issues and S/GAC does not have a plan to ensure timely implementation of data quality improvements. Without sufficient data quality procedures or a documented plan, S/GAC lacks reasonable assurance that its data are reliable for analysis of resource trends.

To address the HIV epidemic, the U.S. Global AIDS Coordinator oversees about $6 billion annually across several U.S. implementing agencies and two international organizations through the PEPFAR program. According to S/GAC, without concentrated efforts to reach the growing youth population, progress achieved toward controlling the HIV epidemic could be reversed.