The Financial Report of the U.S. Government provides a comprehensive view of government finances, including revenues and costs, assets and liabilities, long-term sustainability, and—this year—the financial impact of the federal COVID-19 response.

We audit the financial statements in that report each year, but we haven't yet been able to determine if they fairly present the government's finances. This year, it was due in part to: 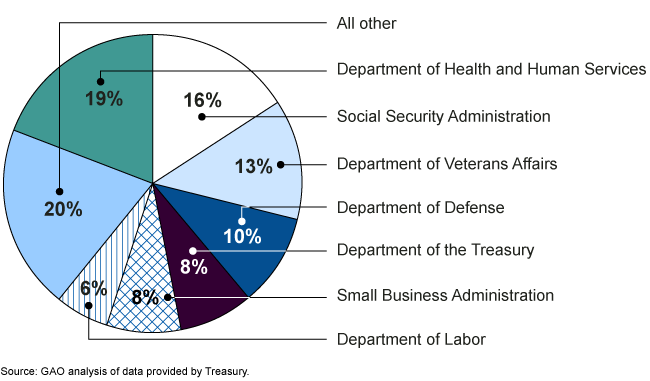 To operate as effectively and efficiently as possible, Congress, the administration, and federal managers must have ready access to reliable and complete financial and performance information—both for individual federal entities and for the federal government as a whole. GAO’s report on the U.S. government’s consolidated financial statements for fiscal years 2020 and 2019 discusses progress that has been made but also underscores that much work remains to improve federal financial management.

GAO also identified two other material weaknesses. These are the federal government’s inability to (1) determine the full extent to which improper payments occur and reasonably assure that appropriate actions are taken to reduce them and (2) identify and resolve information security control deficiencies and manage information security risks on an ongoing basis.

The comprehensive long-term fiscal projections presented in the Statement of Long-Term Fiscal Projections and related information show that absent policy changes, the federal government continues to face an unsustainable long-term fiscal path in which debt is projected to grow faster than gross domestic product. Since 2017, GAO has stated that a plan is needed to ensure that the United States remains in a strong economic position to meet its social and security needs, as well as to preserve flexibility to address unforeseen events. Once the pandemic recedes and the economy substantially recovers, Congress and the administration should quickly pivot to developing an approach to place the federal government on a sustainable long-term fiscal path.

In commenting on a draft of this report, Department of the Treasury (Treasury) and Office of Management and Budget (OMB) officials provided technical comments that GAO incorporated as appropriate. Treasury and OMB officials expressed their continuing commitment to addressing the problems this report outlines.