Under the Mérida Initiative, the U.S. has spent about $3 billion since 2007 assisting security forces with fighting corruption and criminal organizations—like drug cartels—in Mexico.

For programs under the Initiative, there's a risk of funds going to individuals or groups involved in contract fraud, human rights abuses, or other crimes. Yet, the State Department and the U.S. Agency for International Development haven't fully assessed such potential fraud risk. And although State screens Mexican security personnel for human rights violations, it has cut back on vetting other personnel, such as judges.

Our 7 recommendations address these issues. 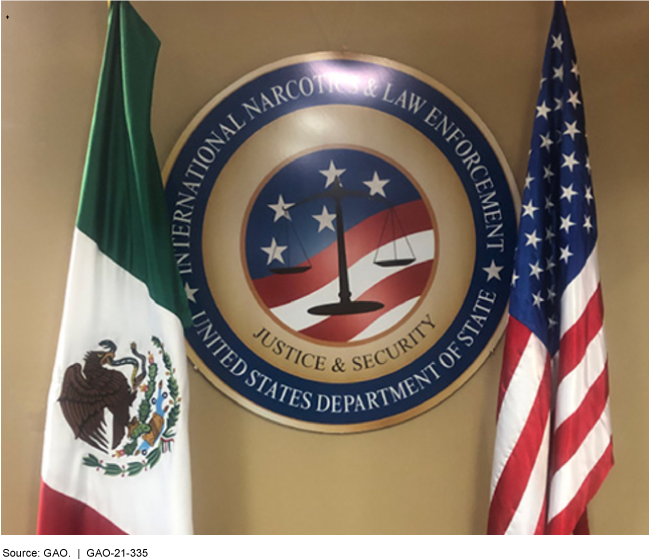 The U.S. has spent about $3 billion in assistance to Mexico under the Mérida Initiative, a partnership created to help reduce violence in Mexico and mitigate effects of the drug trade. Programs under the Mérida Initiative involve a risk that U.S. assistance could be provided to individuals or organizations involved in contract fraud, human rights abuses, drug trafficking, or other crimes. However, the primary agencies behind these programs—the Department of State (State) and the U.S. Agency for International Development (USAID)—have not fully assessed the potential risks of fraud in their Mérida programs. Completing a fraud risk assessment is a key part of GAO's A Framework for Managing Fraud Risks in Federal Programs (Fraud Risk Framework), which agencies are required by Office of Management and Budget policy to follow. State has taken some initial steps, such as identifying potential fraud schemes that could pose risks to its Mérida programs, but has not established a time frame for completing its assessment. USAID has not yet started to conduct such an assessment, although officials said they plan to issue guidance that would direct staff to do so. Completing fraud risk assessments for their programs under the Mérida Initiative would better position State and USAID to fully mitigate any vulnerabilities to fraud.

State and USAID have some fraud controls for their Mérida programs, such as employee background checks and fraud hotlines. However, neither agency currently has an effective antifraud strategy—that is, one that reflects key elements of the Fraud Risk Framework and is important for communicating staff roles and responsibilities. State has issued an administrative notice, which outlines some initial steps to assess fraud risk; however, this notice does not meet the requirements of an effective antifraud strategy. USAID officials said they are in the process of developing an antifraud strategy for the entire agency. However, USAID officials were unable to demonstrate how the agency-wide strategy would include all key elements of a strategy tailored to USAID's program under the Mérida Initiative. Further, both agencies do not have mandatory fraud awareness training, without which their Mérida programs could be vulnerable to unnecessary fraud risks.

This is a public version of a report that GAO issued in November 2020. Information that State deemed sensitive has been omitted.

In 2007 the U.S. and Mexico partnered under the Mérida Initiative to counter threats from Mexican criminal organizations, including drug cartels. The U.S. has provided Mexican security forces with technical support and equipment to strengthen Mexico's justice system and reduce corruption.