The U.S. Agency for International Development planned to spend $1.14 billion helping microenterprises (businesses with under 10 employees) from 2015-2018. We reviewed USAID project evaluations and academic literature to see how this aid affected women and the very poor.

Some experts suggest that such assistance benefits the very poor when combined with other kinds of help, such as sanitation, housing, and food security support.

An agriculture project in Rwanda, an example of a microenterprise effort 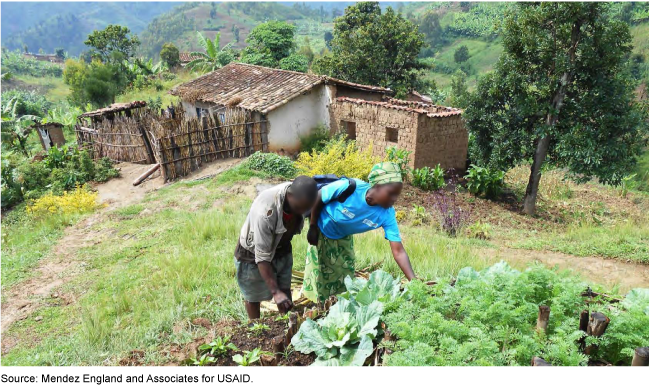 U.S. Agency for International Development (USAID) evaluations that GAO reviewed identified short-term benefits from projects that included assistance for micro, small, and medium-sized enterprises (MSMEs), but the two evaluations of longer-term effects found little evidence of lasting benefits. Most of the 27 evaluations examined projects combining MSME assistance with other types, making it difficult to identify the effects of MSME assistance alone.

The 18 performance evaluations, which examine if a project is operating as intended and meeting project objectives, reported that most projects generally met project objectives for women, such as training women on aspects of entrepreneurship, but were less successful where factors like cultural resistance existed. Projects also provided assistance to address challenges faced by very poor households, including food security and health services.

Of the nine impact evaluations, which assess net effects by making comparisons with groups not receiving assistance,

The meta-analyses and systematic reviews that GAO examined, primarily of microfinance assistance to MSMEs, found little evidence of sustained effects, although experts have suggested that multifaceted approaches may benefit the very poor. Three reviews of economic effects of microenterprise assistance found that estimates of benefits were generally small, and often uncertain or not statistically significant. Two systematic reviews found positive effects of assistance to small and medium-sized enterprises but observed that more rigorous evidence was needed. Other reviews highlighted challenges in estimating the effects of microfinance on women's health and empowerment, noting the difficulty of separating observed effects from the effects of other activities such as for health promotion. Some researchers and practitioners have identified multifaceted approaches to assistance, such as combining microcredit with social support, as promising for the very poor. Some have cautioned, however, that rigorous evidence of the effectiveness of this approach is limited, and identifying which interventions work is difficult.

In response to a draft of this report, USAID stated that assistance for the very poor requires a sustained and multifaceted approach, and that a holistic response is needed to address the challenges of empowering women and helping those in extreme poverty.

From 2015 through 2018, USAID reported that it planned to spend about $1.14 billion on microfinance assistance around the world. This assistance is intended to promote development of MSMEs, which some development experts have identified as needed to help the advancement of the poor.

In January 2019, Congress passed and the President signed the Women's Entrepreneurship and Economic Empowerment Act of 2018 (WEEE Act) to provide more assistance to small and medium-sized enterprises and to continue assistance for microenterprises. The act includes a provision for GAO to provide information on microenterprise and related assistance, especially to women and the very poor. GAO reported on aspects of USAID's implementation of this assistance in GAO-21-269.

This report examines (1) what USAID evaluations of its assistance projects for MSMEs have shown about their effects on women and the very poor; and (2) what is known from research studies and experts outside USAID about the effects of this assistance. GAO reviewed 27 selected USAID project evaluations and interviewed USAID officials. GAO also reviewed relevant literature, including eight meta-analyses and systematic reviews selected from an extensive literature search, and interviewed experts in the field.