Emerging technologies and other economic forces have changed how U.S. workers work and the skills they need for the job market.

This report describes a range of options, identified by experts in a GAO-sponsored virtual roundtable, to reform the current policies and programs for helping workers weather economic disruption.

Providing universal assistance for all workers who lost jobs due to mass layoffs, trade policy changes, or other economic disruptions 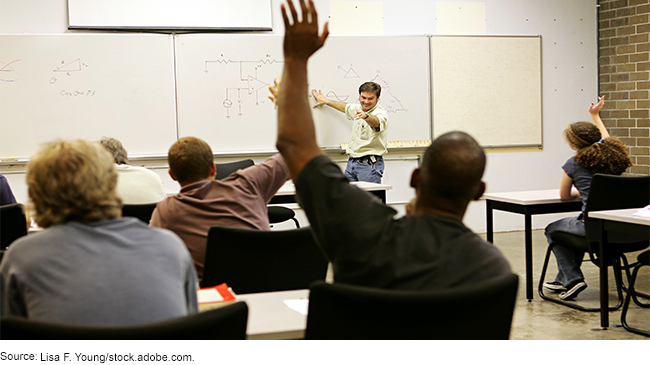 U.S. workers have faced considerable changes in how they work and in the skills they need because of economic changes created by emerging technologies, disruptive business models, and other economic forces. Federal economic adjustment assistance (EAA) programs were established, in part, to help workers adjust to these economic disruptions. Consistent with GAO's prior work on EAA programs, experts in GAO's roundtable identified a range of challenges to using EAA programs to effectively respond to economic disruptions workers might experience.

Examples of Potential Reform Actions That Could Better Serve Workers Who Experience Economic Disruption, as Identified by Experts in GAO's Roundtable

Various economic disruptions, such as policy changes that affect global trade or the defense or energy industries and shifts in immigration, globalization, or automation, can lead to widespread job loss among workers within an entire region, industry, or occupation. GAO was asked about options for reforming the current policies and programs for helping workers weather economic disruption.

This report describes a range of options, identified by experts, to reform the current policies and programs for helping workers weather economic disruption. With the assistance of the National Academies of Sciences, Engineering, and Medicine, GAO convened a 2-day, virtual roundtable in August 2020 with 12 experts, selected to represent a broad spectrum of views and expertise and a variety of professional and academic fields. They included academic researchers, program evaluators, labor economists, former federal agency officials, and state and local practitioners. GAO also reviewed relevant federal laws, prior GAO reports, and other research.