Gun smuggling over the U.S.-Mexican border helps the illegal drug trade and has links to organized crime. The Bureau of Alcohol, Tobacco, Firearms, and Explosives has gathered data on guns recovered in Mexico and traced many of them to U.S. sources.

But ATF's data only shows part of the picture—for example, data reported by the Mexican Attorney General may not include guns recovered by other Mexican agencies. Also, more analysis—e.g., U.S. Immigration and Customs Enforcement analysis of data on U.S.-sourced guns seized in Mexico—could improve understanding of sources and smuggling routes.

Our recommendations address these issues and more.

Example of a Firearm Recovered in Mexico 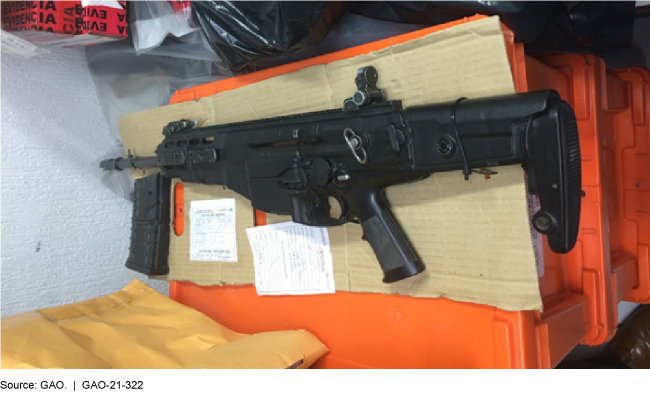 Trafficking of U.S.-sourced firearms into Mexico is a national security threat, as it facilitates the illegal drug trade and has been linked to organized crime. The Department of Justice's Bureau of Alcohol, Tobacco, Firearms and Explosives (ATF) found that 70 percent of firearms reported to have been recovered in Mexico from 2014 through 2018 and submitted for tracing were U.S. sourced. However, ATF does not receive complete data about thousands of firearms, such as those recovered by Mexican states, because only Mexico's federal Attorney General's office submits trace requests to ATF. In addition, the Department of Homeland Security's (DHS) U.S. Immigration and Customs Enforcement (ICE) has identified smuggling trends by analyzing DHS data on 1,012 firearms seized in the U.S. by DHS agencies. However, ICE has not analyzed ATF data on 56,000 U.S. firearms recovered in Mexico. Additional data and analysis could enhance U.S. efforts to understand firearms sources and smuggling routes.

Examples of Firearms Recovered in Mexico

U.S. agencies have undertaken a number of efforts to disrupt firearms trafficking to Mexico—including several recently established efforts as well as prior and ongoing ones—but are unable to assess progress toward this goal.

In fiscal year 2020, ICE and DHS's U.S. Customs and Border Protection (CBP) established a joint operation to intercept firearms being smuggled to Mexico. ICE and CBP also conduct other efforts related to this issue. For example, in fiscal years 2015 through 2017, ICE-led taskforces seized 1,104 firearms along the southwest border. In fiscal years 2014 through 2019, CBP seized an annual average of 115 firearms at the border, and in the first 10 months of fiscal year 2020, CBP increased outbound inspection at some ports of entry and seized 321 firearms.

The Department of State (State) helps lead a working group to coordinate these and other U.S. efforts with the government of Mexico. State also provided $54 million in fiscal years 2015 through 2019 to help build Mexico's capacity to disrupt trafficking through, for example, forensics training, inspection equipment, and canines trained for weapons detection.

However, none of the agencies have fully developed performance measures for their efforts to disrupt firearms trafficking to Mexico, and thus they have limited ability to assess progress. Identifying performance measures—including goals, indicators, targets, and time frames—would enhance their ability to optimize the use of U.S. government resources to address this threat to U.S. national security.

The U.S. Southwest Border Counternarcotics Strategy: 2020 identified the trafficking of firearms from the U.S. into Mexico as a threat to the safety and security of both countries. The Mexican government has estimated that 200,000 firearms are smuggled from the United States each year.

This is a public version of a sensitive report that GAO issued in December 2020.

GAO is making eight recommendations, including recommending that ATF and ICE analyze additional information about the trafficking of U.S.-sourced firearms to Mexico and that ATF, ICE, CBP, and State develop performance measures to assess the results of their efforts to disrupt this trafficking. The agencies concurred with GAO's recommendations.