The Department of Homeland Security started its BioWatch program in response to the 2001 anthrax attack. The program is intended to provide early warning of similar terrorist attacks.

A prior effort to upgrade the BioWatch system proposed using sensors that couldn't distinguish particles like pollen or dust from dangerous agents—causing false alarms. The current effort aims to improve results by using the sensors with new technologies, including machine learning.

These technologies are still in the early stages. To manage acquisition risks, we recommended DHS follow our best practices for technology readiness assessments, and more. 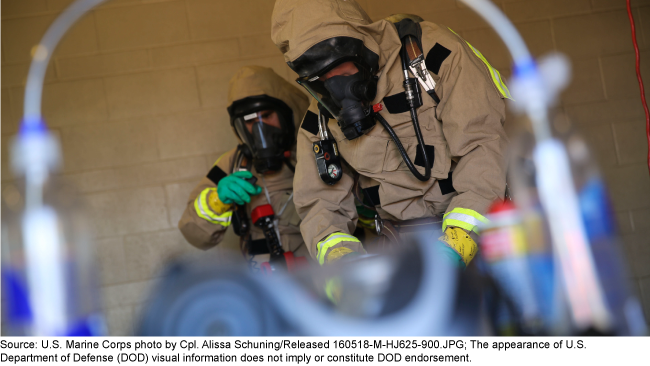 The Department of Homeland Security (DHS) is following the agency's acquisition policy and guidance to acquire Biological Detection for the 21st Century (BD21). This system-of-systems concept—an assembly of technologies to gain higher functionality—is intended to combine various technologies, such as biological sensors, data analytics, anomaly detection tools, collectors, and field screening devices to enable timelier and more efficient detection of an aerosolized attack involving a biological agent than the current biodetection system. The BD21 program is early in the acquisition lifecycle and DHS has not yet selected the technologies to be used. Potential technologies are still being analyzed to demonstrate that certain components of the overall concept are feasible, such as an anomaly detection algorithm.

However, BD21 faces technical challenges due to inherent limitations in the technologies and uncertainties with combining technologies for use in biodetection. For example, biological aerosol sensors that monitor the air are to provide data on biological material in the environment, but common environmental material such as pollen, soil, and diesel exhaust can emit a signal in the same range as a biological threat agent, thereby increasing false alarm rates. Program officials report that the risk of false alarms produced by biological sensor technologies could be reduced by using an anomaly detection algorithm in addition to the sensor. However, it is too early to determine whether integration of an anomaly detection algorithm will successfully mitigate the false alarm rate. Specifically because the algorithms have never been developed and used for the purpose of biodetection in an urban, civilian environment.

BD21 program is following the agency's acquisition policy and guidance to mitigate technological risks in acquisition programs, and plans to conduct technology readiness assessments (TRA) along the way. In 2020, DHS issued a TRA guide, but it lacked detailed information about how the department will ensure objectivity and independence, among other important best practices GAO has identified. If DHS follows GAO's best practices guide, decision makers and program managers will be in a better position to make informed decisions at key acquisition decision events.