EPA has a goal to reduce by half significant noncompliance with individual NPDES permits by the end of FY 2022. But the data that states and facilities report to EPA to help track compliance is incomplete and has errors.

We recommended (among other things) assessing the quality of the NPDES data that states and facilities are reporting so EPA can be sure it's making progress toward its goal. 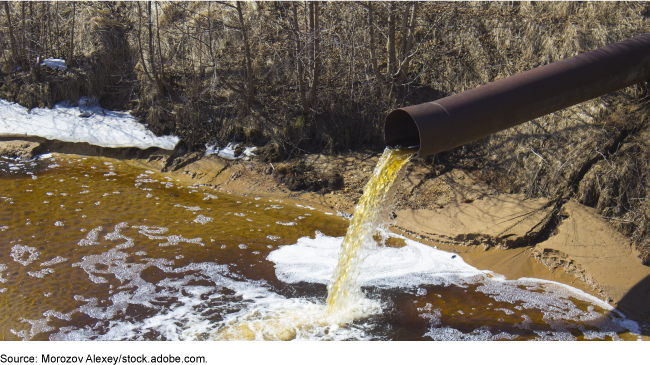 Since 2015, the Environmental Protection Agency (EPA) has modified one of its three national initiatives emphasizing compliance with the Clean Water Act and has discontinued two others (see fig.). The goal of the modified initiative is to reduce significant noncompliance with National Pollutant Discharge Elimination System (NPDES) permits by half by the end of fiscal year 2022. Such permits set limits on discharges of wastewater from point sources, such as a pipe from an industrial facility. This goal supports EPA's strategic objective to increase compliance with environmental laws in its strategic plan for fiscal years 2018-2022. EPA discontinued its initiatives focused on animal waste pollution and raw sewage and stormwater runoff, returning these areas to the core enforcement program in 2018 and 2019, respectively. As a result, these areas no longer receive the heightened attention and focused resources of the national initiatives, but the agency still pursues enforcement actions when needed.

EPA posts data that states report on their NPDES compliance and enforcement activities to its website, but the data are not reliable for identifying changes in the number of activities states conducted since 2015. EPA's most recent assessment of states' data showed that two of 17 states met expectations for the accuracy and completeness of the data recorded in the agency's national database. EPA is working with states to improve their data, and it includes on its website disclosures by some states about problems and limitations with their data. However, the agency has not ensured that all states' disclosures are consolidated, complete, and updated. Until it does so, potential users of the data may not fully understand the data or the data's limitations.

EPA developed a measure to track progress toward its goal for reducing the rate of significant noncompliance by NPDES facilities with individual permits by the end of fiscal year 2022. While the measure tracks changes in the number of facilities in significant noncompliance, the results of the measure are unclear because data EPA needs to track compliance are incomplete and contain inaccuracies. According to EPA, about 70 percent of NDPES facilities have sufficiently complete data in the national database for EPA to track compliance. EPA is working with states to improve data quality, but it does not have a plan to assess the overall accuracy of the data. Until it does so, EPA cannot be certain what its measure is showing and if EPA is making progress toward its goal.

EPA partners with states to oversee compliance with and enforcement of the Clean Water Act. In fiscal year 2020, there were roughly 335,000 facilities with active NPDES permits, which are used to regulate wastewater discharges under the act. In 2015, EPA began requiring states and facilities to electronically report data on their NPDES activities. EPA estimated that in 2018, nearly 11,000 facilities significantly exceeded their permit limits and illegally discharged pollutants into nearby waters, which may pose serious threats to human health and the environment.

GAO is making four recommendations, including that EPA consolidate, complete, and update disclosures of data limitations on its reporting website and develop a plan to assess the overall quality of state reported NPDES data. EPA generally agreed with these recommendations.