There's a greater risk of maternal death during pregnancy or soon after from pregnancy-related causes among rural residents, according to the Centers for Disease Control and Prevention.

CDC and the Health Resources and Services Administration fund programs aimed at reducing maternal mortality, including in rural or underserved areas where it can be harder to get health care services.

These agencies collect data—like the percentage of women receiving postpartum visits—but don't always separate and analyze this data for rural and underserved areas. We recommended they do so to help ensure program funding helps those in need. 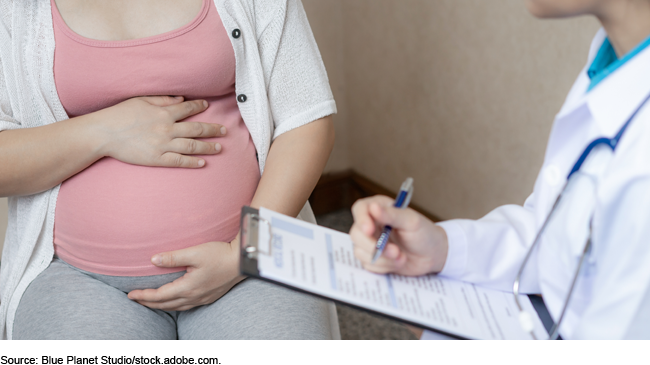 Nationwide data from the Centers for Disease Control and Prevention's (CDC) Pregnancy Mortality Surveillance System from 2011-2016, the most recent data available at the time of GAO's review, indicate that deaths during pregnancy or up to 1 year postpartum due to pregnancy-related causes—are higher in rural areas compared to metropolitan areas. See figure. CDC data also showed higher mortality in underserved areas (areas with lower numbers of certain health care providers per capita).

GAO also analyzed the most recent annual data available from the Agency for Healthcare Research and Quality for 2016-2018 on severe maternal morbidity (SMM)—unexpected outcomes of labor and delivery resulting in significant health consequences. Nationwide, these data showed higher estimated rates of SMM in metropolitan areas (72.6 per 10,000 delivery hospitalizations) compared to rural areas (62.9 per 10,000).

CDC and another Department of Health and Human Services (HHS) agency, the Health Resources and Services Administration (HRSA), fund several maternal health programs that aim to reduce maternal mortality and SMM, including some that target rural or underserved areas. CDC and HRSA collect program data, such as the percentage of women who received postpartum visits, to track progress in improving maternal health, but they do not systematically disaggregate and analyze program data by rural and underserved areas. By taking these actions, CDC and HRSA could help better ensure that program funding is being used to help address any needs in these areas.

HHS has taken actions to improve maternal health through its funding of various programs and releasing an action plan in 2020. HHS also has two workgroups that aim to coordinate across HHS agencies on maternal health efforts, such as program activities that aim to reduce maternal mortality and SMM. Officials from HHS's two workgroups said they coordinated in developing the action plan, but they do not have a formal relationship established to ensure ongoing coordination. Officials from one of the workgroups noted that they often have competing priorities and do not always coordinate their efforts. By more formally coordinating their efforts, HHS's workgroups may be in a better position to identify opportunities to achieve HHS's action plan goal for reducing maternal mortality and objectives that target rural and underserved areas.

Each year in the United States, hundreds of women die from pregnancy-related causes, and thousands more experience SMM. Research suggests there is a greater risk of maternal mortality and SMM among rural residents and that underserved areas may lack needed health services.

GAO was asked to review maternal mortality and SMM outcomes in rural and underserved areas. This report examines, among other objectives, what is known about these outcomes; selected CDC and HRSA programs that aim to reduce these outcomes, as well as actions to collect and use relevant data; and the extent to which HHS is taking actions to improve maternal health and monitoring progress on its efforts. GAO analyzed HHS data, agency documentation, literature, and interviewed officials from a non-generalizable sample of three states and stakeholders to capture various perspectives.

GAO is making three recommendations, including that CDC and HRSA disaggregate and analyze program data by rural and underserved areas, and that HHS's workgroups establish a formal coordinated approach for monitoring maternal health efforts. HHS concurred with GAO's recommendations.