Draining wetlands can harm water quality and wildlife habitat. Millions of acres of wetlands known as "potholes" remain in the Midwest, often on farms. The U.S. Department of Agriculture can withhold benefits from farmers who violate wetlands conservation rules.

In addition, USDA procedures call for committees of farmers to decide waivers. We found USDA relied on weak justifications.

Our 6 recommendations address these issues. 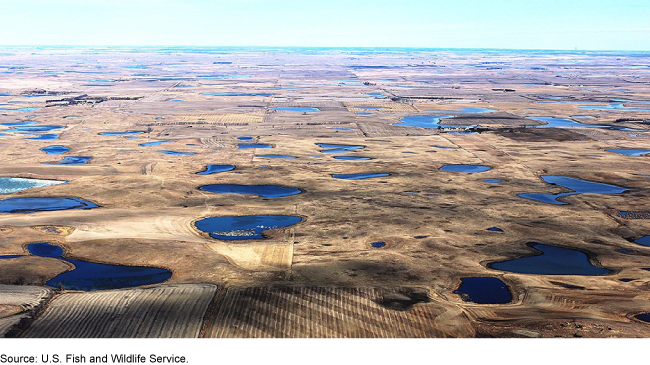 The U.S. Department of Agriculture's (USDA) Natural Resources Conservation Service (NRCS) has taken steps to increase the consistency of their determinations about where wetlands exist on farmers' lands. For example, NRCS state offices formed teams to make such determinations in the prairie pothole region (see fig.), which covers parts of Iowa, Minnesota, North Dakota, and South Dakota. These offices also standardized their wetland determination procedures and included more details, such as the types of data that can be used to identify wetland boundaries. Under wetland conservation provisions in federal law, to receive the benefits of certain USDA farm programs, farmers must not convert wetlands to cropland.

Wetlands and Cropland in the Prairie Pothole Region

NRCS's primary method to ensure compliance with wetland conservation provisions is conducting annual compliance checks of selected tracts of land for farmers in USDA programs. To select tracts, NRCS draws a national random sample. The sample is to include about 1 percent of tracts subject to wetland the provisions nationally, so many tracts are not sampled for years. For 2014 through 2018, NRCS identified fewer than five farmers with wetland conservation violations per year on the approximately 417,000 tracts in North Dakota and South Dakota—the states with the most wetland acres. Agency officials said NRCS has limited resources to conduct more checks. However, some USDA agencies emphasize risk-based criteria, rather than a random sample, in selecting tracts to check for compliance with other provisions. Doing so makes the checks more efficient by targeting the tracts most likely to have violations. If NRCS used a risk-based approach for its compliance checks (e.g., using information on acres cultivated annually on tracts), it could more efficiently ensure compliance with wetland conservation provisions.

If NRCS finds violations, USDA's Farm Service Agency (FSA) may withhold program benefits from farmers, or it may grant waivers to farmers who acted in good faith, without intent to commit violations. FSA granted 243 of 301 requests for good-faith waivers from 2010 to 2018, according to FSA data. FSA relies on committees of fellow farmers to decide on waivers by considering factors such as prior violations. GAO found that some committees relied on weak justification to grant waivers even if farmers had prior violations and that FSA had not specified what is adequate justification. By specifying what constitutes adequate justification, FSA could better ensure it provides benefits only to eligible farmers.

Wetlands perform vital ecological functions, and draining them can harm water quality and wildlife habitat. Many wetlands were drained for farming before enactment of wetland conservation provisions in 1985. However, millions of acres of wetlands, known as potholes, remain in the prairie pothole region.

NRCS determines where wetlands exist on the land of farmers who participate in USDA farm programs, and it identifies violations of wetland provisions. FSA administers farm program benefits. In 2017, USDA's Office of Inspector General reported that NRCS had implemented wetland determination procedures in the prairie pothole region inconsistently.

GAO was asked to review USDA's implementation of wetland conservation provisions in the prairie pothole region. This report examines, among other objectives, the steps NRCS has taken to increase the consistency of wetland determinations and the approaches NRCS and FSA use to ensure compliance with the provisions. GAO reviewed agency manuals, data, and files on wetland determinations and waivers, and interviewed agency officials and stakeholder groups.

GAO is making six recommendations, including that NRCS use a risk-based approach for its annual compliance check and that FSA specify what constitutes adequate justification to grant good-faith waivers. The agencies agreed with five recommendations and partly agreed with the sixth, which GAO modified, as discussed in the report.