The Food and Drug Administration ensures that imported seafood is safe to eat. If companies violate food safety regulations and pose a public health risk, FDA may send them warning letters.

For the letters that FDA sent from 2014-early 2019, FDA didn't consistently follow key procedures or meet key goals. For example, FDA set a goal to conduct follow-up inspections within 6 months of issuing a warning letter to ensure violations were corrected. But FDA met this goal for just 14 of 125 warning letters sent for significant inspection violations.

We recommended that FDA monitor whether it's following procedures and meeting goals for its warning letters. 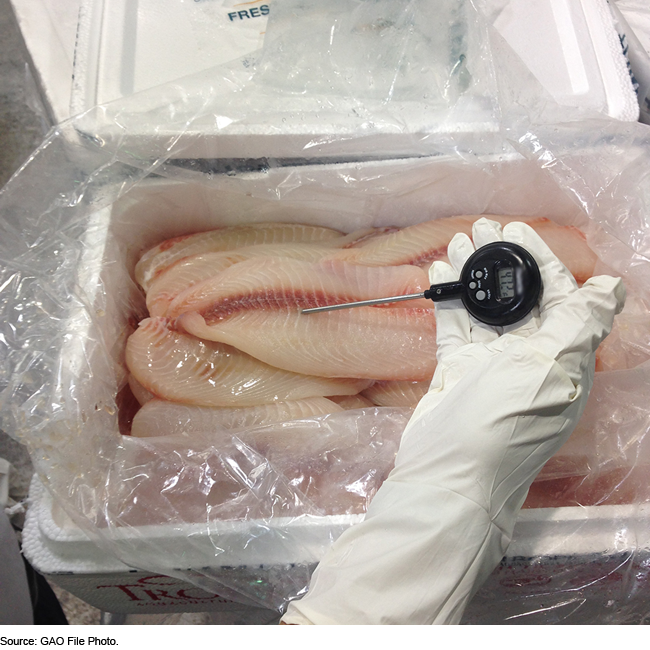 Warning Letters Based on Significant Inspection Violations for Which FDA Met Its 6-Month Follow-up Inspection Goal, Issued January 1, 2014, Through March 11, 2019

While FDA has some monitoring tools, the agency does not have a monitoring process that allows it to determine whether all imported seafood warning letters (to both domestic and foreign firms) consistently follow procedures and meet goals, and FDA officials stated the agency had not conducted such a review of all letters. Developing a monitoring process, which could include regularly reviewing aggregate data, would increase FDA's awareness of whether the letters adhere to procedures and goals and help FDA ensure significant food safety violations have been adequately corrected.

FDA has not established performance goals and corresponding measures for its imported seafood warning letter process—key elements for assessing effectiveness. By developing performance goals and measures, such as percentage of warning letters resolved within 1 year of being issued, FDA would be better positioned to assess how well its process ensures the safety of imported seafood.

FDA is responsible for ensuring the safety of most imported seafood. FDA relies, in part, on inspections of importers' facilities and of processors' foreign facilities to ensure compliance with federal law. If FDA identifies significant violations, such as firms not identifying food safety hazards likely to occur during processing, the agency can issue the firm a warning letter.

GAO recommends that FDA (1) establish a process to monitor whether the agency is following the procedures and meeting the goals established for its warning letter process for imported seafood, and (2) develop performance goals and measures to assess how effective warning letters are at ensuring the safety of imported seafood. FDA agreed with GAO's recommendations.