3 agencies made awards to these businesses

The National Institutes of Health made the most awards

The reasons agencies cited for making the awards included a belief that they would produce innovation and prompt research in areas that have not drawn private investment. 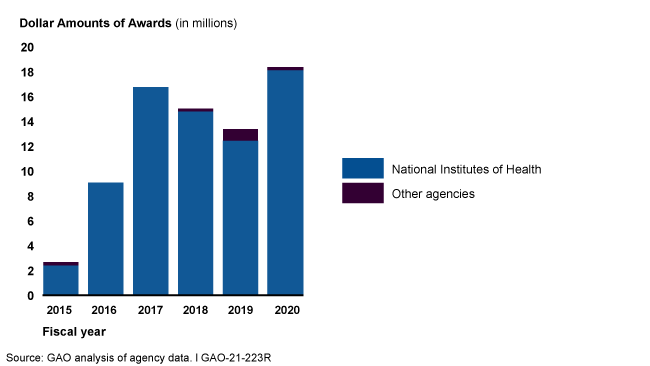 The Small Business Act, as amended, includes a provision for GAO to conduct a study of the impact of requirements relating to the involvement of investment companies and funds in the SBIR program and submit a report to Congress regarding the study every 3 years. GAO's first review covered fiscal years 2013 and 2014, and in December 2018, GAO issued its second report on this issue, for fiscal years 2015 through 2018. This third report addresses (1) SBIR participating agencies' awards to small businesses that are majority-owned by multiple investment companies and funds in fiscal years 2019 and 2020 and (2) reasons participating agencies cited for allowing or not allowing the participation of qualified small businesses in the SBIR program. GAO reviewed agencies' data on the participation of qualified small businesses and conducted interviews with or obtained written answers from program managers from the 11 participating agencies and SBA.