But drug monitoring programs aren't always accessible from within electronic health record systems. State and federal agencies are helping to integrate the 2 systems—such as by offering funds or providing technical support. 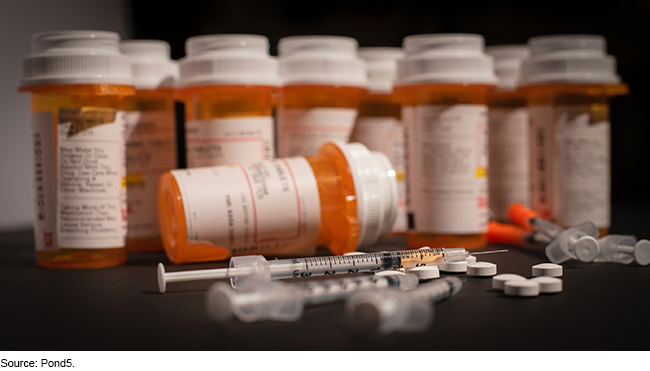 Physicians GAO interviewed generally found prescription drug monitoring programs (PDMPs) to be useful in preventing drug misuse and potentially dangerous drug prescribing. PDMPs are state-operated electronic databases that track prescriptions patients receive for opioids or other medications that are at risk of being misused. Most of the 31 physicians GAO interviewed said PDMP information helped them identify potential doctor shopping (when patients inappropriately seek medications from multiple physicians) and avoid potentially dangerous drug prescribing (such as dangerous drug combinations or high cumulative amounts). About half of the physicians also found PDMPs useful for providing overall patient care. Some of these physicians said their PDMPs provided more comprehensive information on patients' prescription histories than was available in patients' electronic health records (EHR). Physicians described how they could use PDMP information to determine which medications a patient had received and to discuss with patients the risks or benefits of treatment options.

Physicians identified the lack of integration of PDMP information into EHR systems as a key challenge for most effectively using PDMPs for patient care. With integration, physicians can access PDMP information within EHR systems they use, rather than accessing the PDMP separately. Most of the physicians GAO interviewed said their PDMP was not integrated with their EHR system and accessing the PDMP separately was a challenge. Some stakeholders knowledgeable about PDMPs said the extra time it takes to search the PDMP without integration could place a significant time burden on some physicians, such as those working in an emergency department in which time may be limited.

State and federal agencies are taking steps to improve PDMP integration with EHR systems. For example, state officials from nine of the 10 states in GAO's review described efforts to facilitate integration of PDMP information into EHRs. Federal agencies that support PDMPs, including the Department of Justice (DOJ) and Department of Health and Human Services (HHS), have also made funding and technical support available to states to help improve integration.

Prescription medications—particularly when misused or overprescribed—can contribute to dangerous drug interactions, substance use disorder, overdoses, and deaths. The federal government has identified PDMPs as key tools to help ensure the safe and appropriate prescribing of opioids and other controlled substances.

The Substance Use-Disorder Prevention that Promotes Opioid Recovery and Treatment for Patients and Communities Act includes a provision for GAO to study the operation of PDMPs. In this report, GAO describes (1) physicians' views on the usefulness of PDMPs when making patient care decisions; and (2) challenges to using PDMPs when making patient care decisions, as well as state and federal efforts to address these challenges.

GAO interviewed 31 physicians in 10 selected states and PDMP officials in nine of the 10 states. The selected states vary geographically and by other factors such as overdose death rates. GAO selected physicians from medical specialties that prescribe opioids. GAO also conducted interviews with relevant national organizations, organizations representing pharmacists, and officials from federal agencies that support PDMPs, and reviewed relevant federal strategy documents and grant announcements. GAO received technical comments on a draft of this report from HHS, DOJ, and the Office of National Drug Control Policy, and incorporated them as appropriate.