The Army Corps of Engineers spends billions of dollars on construction projects nationwide. The Corps' guidance describes how its district staff should monitor contractors' compliance with the Davis-Bacon Act, which requires federal construction contractors to pay workers at least the local prevailing wage.

We made 3 recommendations, including that the Corps clarify guidance on selecting payroll records to review. 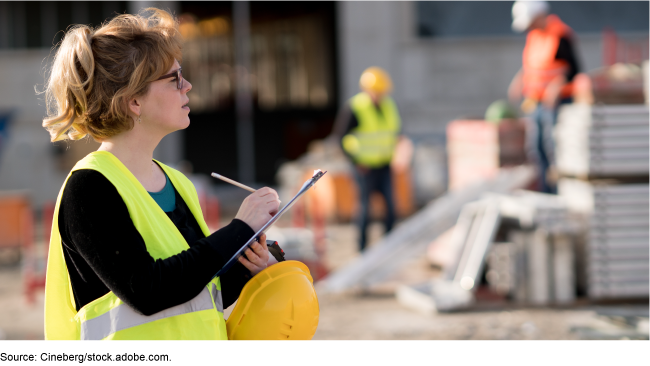 Army Corps of Engineers (Corps) guidance documents describe how agency staff should monitor and enforce compliance with federal requirements for construction wages paid by contractors under the Davis-Bacon Act, as amended, (the Act) but some sections lack information that could help the Corps better ensure workers are paid the prevailing wage. For example, Corps documents describe requirements for Corps district staff to review contractors’ payroll records to confirm workers are paid the correct wages. The documents do not include parameters on how to determine the percentage of payroll records to review or select a sample to review. Internal control standards state that management should provide necessary information to achieve objectives. Corps officials said they give districts autonomy to determine some payroll review practices, which may vary based on local factors, such as the size of a project, but Corps guidance documents do not describe these factors. Without additional information on selecting payroll records, some districts may not have considered local factors or may be unclear about payroll selection. As a result, the Corps may be missing an opportunity to strengthen payroll reviews. Additionally, Corps documents generally reflect requirements for on-site inspections, in which Corps staff observe the number of workers and type of work performed. Although these documents direct Corps staff to compare payroll records submitted by contractors to these on-site observations, they do not describe a process for district staff to consistently document their observations. Internal control standards state that management should provide necessary information for staff to perform key roles. Corps headquarters officials said some on-site observations are collected in other documents. However, these documents only cover some workers, and there is no process for district staff to consistently document on-site observations. As a result, the Corps cannot be certain districts fully use on-site inspections to ensure compliance with the Act.

Officials GAO interviewed in four selected Corps districts described variation in on-the-ground monitoring practices, but their enforcement practices were generally uniform. For example, officials described wide variation in the proportion of payroll records reviewed and in how they select a sample to review. Officials in one district said they aim to review 100 percent of all records, while officials in another district said they review the first 20 percent they receive. Officials also reported conducting on-site inspections differently. Officials in all four districts said they generally observe workers at the construction site daily, but officials in three said they rely on contractors to document some on-site information, such as the number of workers. Officials in the four districts reported generally uniform enforcement practices. For example, when they notice a potential violation of the Act, they said they notify the contractor who typically corrects the issue promptly. When the contractor does not correct the issue, they said they withhold payment until the issue is resolved.

The Corps, which leads numerous military and civilian construction projects, obligated over $11 billion for domestic construction contracts in fiscal year 2019, more than any other component in the Department of Defense, according to GAO’s analyses of contract data. Each federal agency that contracts for construction work is primarily responsible for monitoring contractor compliance with the Davis-Bacon Act and enforcing the Act’s requirements. However, the extent to which the Corps monitors and enforces its contractors' compliance has not been fully evaluated.

To examine reported practices of selected districts, GAO conducted semi-structured interviews with officials in a non-generalizable sample of four of the Corps’ 38 domestic district offices and reviewed relevant district documents. The four districts represent a mix of the volume and type of Corps construction contracts (e.g. military and civilian projects) and geographical location.

GAO is making three recommendations, including that the Corps provide clarifying information to staff about selecting a sample of payroll records to review, and establish a process for staff to consistently document on-site inspections. The Corps concurred with the recommendations.