As of 2018, there were more than 605,000 spouses of U.S. military active duty service members. Frequent moves and difficulty transferring occupational licenses are some of the challenges that these spouses may face when pursuing careers.

The Department of Defense offers various resources, like virtual career coaching, to help military spouses find jobs. But inconsistent information-sharing across DOD limits the effectiveness of outreach about these resources. In addition, DOD doesn't plan to continue assessing and reporting on states' efforts to help military spouses transfer occupational licenses. Our recommendations address these issues. 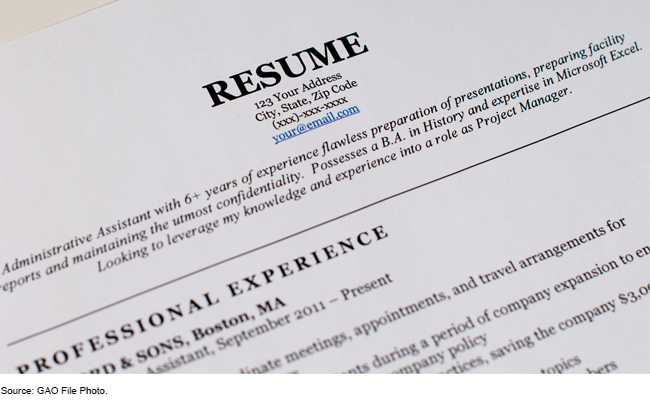 According to estimates from Department of Defense (DOD) survey data, roughly one-quarter of military spouses who were in the workforce and in career fields that required credentials (state licenses or certifications) were unemployed in 2017. In that same year, about one-quarter of spouses who were employed in credentialed career fields were working outside their area of expertise, and about one in seven were working part-time due to a lack of full-time opportunities—two potential indicators of underemployment. Employment outcomes for military spouses may also vary due to other factors, including their partner's rank and frequent moves, according to DOD survey data and GAO's literature review.

In February 2020, the Defense State Liaison Office, which works on key issues affecting military families, assessed states' use of best practices that help military spouses transfer occupational licenses. For example, the Liaison Office found that 34 states could increase their use of interstate compacts, which allow spouses in certain career fields, such as nursing, to work in multiple states without relicensing (see figure). However, the Liaison Office does not plan to continue these assessments, or assess whether states' efforts are improving spouses' experiences with transferring licenses. As a result, DOD may not have up-to-date information on states' actions that help spouses transfer their licenses and maintain employment.

DOD and the military services use a range of virtual and in-person outreach to promote awareness of employment resources among military spouses. For example, officials GAO interviewed at installations said they promoted resources through social media and at orientation briefings. Nonetheless, GAO found that inconsistent information sharing across DOD and with external stakeholders who help spouses with employment hindered the effectiveness of outreach. For instance, officials from two services said they do not have methods to regularly exchange outreach best practices or challenges, while officials from another service said they have quarterly staff calls to share lessons learned. Without strategies for sharing information among internal and external stakeholders, DOD may miss opportunities to increase spouses' awareness of available resources, and improve their employment opportunities.

There were over 605,000 spouses of active duty servicemembers in the U.S. military as of 2018. These spouses may face conditions associated with the military lifestyle that make it challenging to start or maintain a career, including frequent moves and difficulties transferring occupational licenses.