Research suggests that in countries where women participate in the labor force, economies enjoy greater growth than in similar countries where participation is restricted. U.S. trade preference programs aim to foster growth in about 130 developing countries. However, women may face disproportional challenges participating in them.

We reviewed the 4 U.S. trade preference programs and found that they do not specifically protect or promote women's rights and economic interests, but do protect some general worker rights for all. Multilateral organizations have developed indicators of how well women's interests are protected in various countries.

Countries that are eligible for U.S. Trade Preference Programs, according to the U.S. Trade Representative 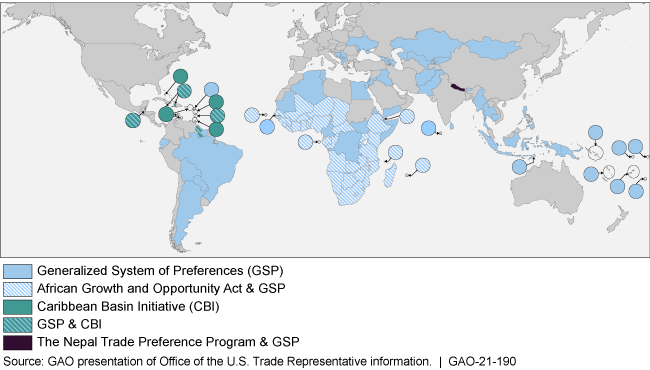 The four U.S. trade preference programs that are intended to foster economic development by offering eligible developing countries duty-free access to the U.S. market (for select products) do not contain legal provisions specifically protecting or promoting women's rights and economic interests in the trade arena, such as equal access to credit. However, they do include provisions protecting some general rights for both women and men. Although the statutory language varies, all of the programs require beneficiary countries to be making progress toward affording internationally recognized worker rights.

Program statutes do not require U.S. agencies to monitor or report specifically on women's rights and economic interests in the trade arena, but agency reports on U.S. trade preference programs include some episodic information on those rights and interests. GAO's review of 10 years of mandated agency reports on U.S. trade preference programs found mention of at least one issue pertaining to women in more than half of the reports, with no mention in the remaining reports. For example, in its 2018 biennial African Growth and Opportunity Act report, the Office of the U.S. Trade Representative (USTR) noted concerns about alleged recruitment of Burundian women for forced labor. However, USTR officials stated that they may not report on such issues every year that they occur because they focus their reports on issues they determine to be of the highest priority for that reporting period.

Lowest and Highest Scores for GSP-Eligible Countries on the World Bank's Women, Business and the Law Index in 2020

Research suggests that in countries where women participate in the labor force, economies enjoy greater economic growth than in similarly situated countries that restrict access to women's economic participation. Trade preference programs, such as GSP, offer duty-free access to the U.S. market for over 3,500 products from beneficiary developing countries. However, according to USTR and World Bank reports, women in some countries may disproportionately face challenges that may affect their ability to benefit from these programs, such as barriers to participating in the labor force. With GSP expiring in December 2020, Congress has an opportunity to explore the option of renewing the program.

GAO was asked to review U.S. trade preference programs' promotion of women's rights and economic interests in the trade arena. This report examines (1) whether and how U.S. trade preference programs protect or promote women's rights and economic interests, (2) the extent to which U.S. agencies monitor and report on provisions that are pertinent to women's participation in trade, and (3) additional indicators pertinent to women's participation in trade that multilateral organizations have developed and tracked.